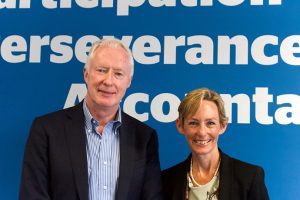 Trócaire has named Caoimhe de Barra as its new Chief Executive Officer (CEO). The 48-year-old Dublin woman worked for Trócaire for 18 years, and more recently for Concern Worldwide. She will return to Trócaire to take up the role in October and replace Éamonn Meehan, who is retiring.

“Trócaire carries out vital work in over 20 countries around the world. This work is driven by an ethos of social justice. Trócaire is deeply embedded in Irish culture and is an organisation people in Ireland are rightly proud of,” said Caoimhe de Barra. “I am passionate about its mission and values.”

She looks forward to working with the team and supporters, partner organisations and communities that Trócaire serves overseas, as well as other key partners, including the Irish government, missionaries and other NGOs.

Éamonn Meehan congratulated her on her appointment and expressed his confidence that the organisation would continue to go from strength to strength.

The selection process was led by Bishop William Crean, Chair of the Board of Trócaire. Commenting on the appointment, he said the selection panel was delighted to appoint a person of such talent. Bishop Crean said: “I am constantly amazed by the commitment and dedication of Trócaire’s staff around the world. Under Caoimhe’s leadership, the organisation will continue to deliver real and meaningful change to the lives of some of the poorest people in the world.”

He also paid tribute to Éamonn Meehan, who has given 27 years of service to Trócaire.

Archbishop of Armagh and Primate of All Ireland, Archbishop Eamon Martin, also welcomed the appointment, stating: “When the Bishops’ Conference established Trócaire in 1973 they said we must never grow accustomed to injustice or grow weary in the work of tackling it. That sentiment is as important now as it was 45 years ago. Trócaire has the support of parishioners all over Ireland and carries out life-saving and life-changing work in their name.”

He said that as Chair of the Trustees, he looks forward to working with Caoimhe de Barra and added: “She has an exceptional background and is clearly driven by the ethos and values that make Trócaire such an important institution in Irish life.” 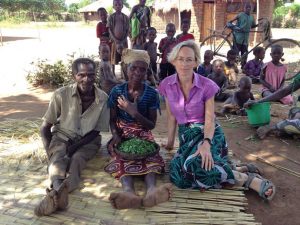 Caoimhe de Barra, new CEO of Trócaire, in a rural village in Malawi

Caoimhe de Barra first joined Trócaire in 1997 as Campaigns Officer, and later became Policy and Advocacy Coordinator. She moved to Mozambique in 2007 to take up the role of Assistant Regional Manager for Southern Africa with Trócaire.

In 2011 she was appointed Director of Trócaire’s International Division, managing development and humanitarian operations in over 20 countries. Here she worked towards change in the structure and direction of the Division, leading to significant impact on the lives of vulnerable people.

From May 2015 to July 2018, Caoimhe de Barra was Country Director for Concern Worldwide in Malawi, where she managed one of the largest ever humanitarian responses to a food crisis in that country.

A fluent Irish speaker, Caoimhe de Barra is married to Carl, and has two sons, Fionán and Ferdia. She has a Masters in Development Studies from University College Dublin.