Tributes were paid to the memory of one of Ireland’s foremost peacekeepers with the launch of a book in his hometown recently. 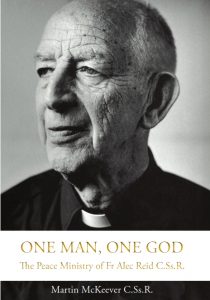 The name of Redemptorist priest Fr Alec Reid is synonymous with the peace process in Northern Ireland.

Fr Reid, who was a native of Nenagh in Co. Tipperary, was one of the main negotiators in the IRA ceasefire which helped end decades of conflict in Northern Ireland. Along with Methodist Minister Rev Harold Good, he oversaw the decommissioning of IRA arms. He passed away in 2013 after a short illness.

Fr Reid, who worked in Clonard Monastery in Belfast, was also proud of his native county. He was a member of the Tipperary minor hurling panel which won the All-Ireland in 1949 and he was a joint recipient of the 1995 Tipperary International Peace Award. Fr Reid was also named the Tipperary Person of the Year by the Tipperary Association, Dublin in April 2006. On January 29 2017 an inaugural Father Alec Reid Festival of Hurling was held between Antrim and Tipperary.

The book, entitled One Man One God, The Peace Ministry of Fr Alec Reid C.Ss.R., by Fr Martin McKeever C.Ss.R., was launched at Nenagh library recently by Rev Harold Good, the Methodist minister who oversaw the decommissioning of IRA arms with Fr Alec.

Speaking at the launch, Rev Harold Good said that Fr Alec spoke so often about his ‘Nenagh family’. Speaking about Fr Alec he said, “we came from two different traditions but he took delight in what we had in common. We shared the same humour, banter, our faith, our understanding of the Gospel that, sadly, many in our churches don’t. We also shared our travels, and he said his best loved journey was the journey of decommissioning.”

Rev Good recalled that when the last IRA gun was handed over in front of General de Chastelain, Fr Alex turned to him and said, “There goes the fun out of Irish politics.”

Author Fr McKeever described the publication as “not a biography and not a history of the Troubles though both are in there.” He added that in order to understand Fr Alec we must look at his life as a priest: “Prayer broadens the heart, and he prayed a lot, which gave him space in his heart. He used compassionate companionship as the only Christian response. He was not approving wrong, but he was inviting them to find reconciliation.”

One Man, One God, The Peace Ministry of Fr Alec Reid CSsR, by Fr Martin McKeever, is published by Redemptorist Communications and retails at €14.95.