Home > Featured > Tributes paid to inspirational Irish priest in the US

Tributes paid to inspirational Irish priest in the US 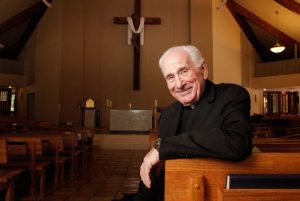 An Irish missionary priest who was known as “an iconic figure in Tampa Bay’s history” in the US passed away last week.

He was the pastor at St Lawrence for 49 years, the longest serving priest in the diocese, giving a length of service that was “unheard of” according to Bishop Robert Lynch of the Diocese of St Petersburg.

“If ever there was an iconic figure in Tampa’s history, it’s Mgr Higgins,” Mayor Bob Buckhorn, who was married by the Monsignor told the Tampa Bay Times.

“He has been a mentor, spiritual leader and confidant to tens of thousands of Catholics and non-Catholics.”

The son of John and Philomena Higgins, Mgr Higgins was the third of eight children — five girls and three boys — all born on a Co Derry farm.

Larry Higgins grew up 39 miles southwest of Belfast in Magherafelt. His father farmed, exported seeds and worked as a government administrator.

Higgins settled down and graduated from a third college. He studied medicine at the Royal College of Physicians and Surgeons in Dublin for nearly two years, then changed his mind and enrolled at All Hallows Seminary, which trained missionaries, also in Dublin.

While in the seminary, Higgins became part of a wave of priests sent to serve the Catholic Church’s growing membership in the United States.

He spent five years in Miami, then moved north in 1958.

In Tampa, he was put in charge of 20 acres of church-owned land on N Himes Avenue.

A Jesuit high school had just been built, but much of the rest of the area was swamp and scrub oaks, with no football stadium down the street.

He said his first Mass on 8 February 1959 to a congregation of 216 at Hillsborough High School.

And four months after that, a third service was launched at the Wellswood Civic Centre.

He established the parish of St Lawrence in Tampa and grew the parish to about 2,200 families.

In the 1970s, the Church offered Higgins a more established parish. He declined, asking to stay at St Lawrence and also take on the pastorship at St Peter Claver, a black parish near Ybor City.

“Monsignor was everywhere in this community,” said philanthropist Susan Sykes, who served with Higgins on the board of the Crisis Center of Tampa Bay.

“If he was close to an organization, you knew it was a worthwhile cause to support.”

In the 1970s, the Church offered Higgins a more established parish. He declined, asking to stay at St Lawrence and also take on the pastorship at St Peter Claver, a black parish near Ybor City.

After Higgins’ two years at St Peter Claver, then-President Jimmy Carter appointed Higgins to the US Commission for Civil Rights for southern states, where he served along with the late Rev. Leon Lowry and the late Rev Abe Brown, both also of Tampa.

In 2002, Mgr Higgins courted controversy again by joining Greco and other Tampa leaders on a quietly arranged trip to Cuba and giving a blessing to communist dictator Fidel Castro.

Putting both hands atop Castro’s head, Mgr Higgins prayed in the Latin that Castro had learned in Jesuit school “May God the Father, the Son and the Holy Spirit descend upon you and bless you. Amen.”

Then he added in English, “May God give you strength to do His will. Amen.”

Mgr Higgins died at his rectory home at St Lawrence Catholic Church, the parish he was sent to Tampa to found in 1958.

He had been in and out of the hospital for the last couple of years, had struggled in recent months and succumbed to heart failure.

Mgr Higgins funeral mass will take place at 11:30am on 31 August at St Lawrence Catholic Church, with burial afterwards at the Garden of Memories Cemetery.