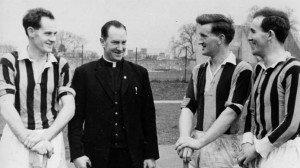 Just a day after the great Henry Shefflin announced his retirement from inter-county hurling, Kilkenny suffered another major blow with the death of one of the most successful hurling managers of all time – Mgr Tommy Maher.

Under Fr Maher’s stewardship, the ‘Black and Amber’ won seven All-Ireland hurling titles in the period from 1957 to 1975 and saw the likes of Ollie Walsh, ‘Fan’ Larkin, Eddie Keher and current Cats boss Brian Cody come to the fore .

“I first came across him in St Kieran’s College in the mid 1950s. What he did was analyse the game in a way in which it was never analysed before.”

He identified all the skills of the game and devised routines to practice those skills and make them perfect. A lot of those routines are still used by players today.

“As a tactician he was brilliant in analysing the opposition and devising strategies to overcome them. He was also a brilliant speaker and orator – a very inspirational figure,” Eddie Keher said.

He arrived on the inter-county scene at the age of 23 when he first linked up with the Kilkenny senior team.

He made his senior debut during the 1945 championship.

Fr Maher enjoyed a brief inter-county career and won one Leinster medal as a non-playing substitute.

He was an All-Ireland runner-up on one occasion. At club level Maher enjoyed a brief career with Castle Rovers and Thomastown.

After retiring from playing the game, Maher became involved in team management and coaching.

As trainer and coach of the Kilkenny senior team for over twenty years he guided the team to seven All-Ireland titles, fourteen Leinster titles and three National Hurling League titles.

Maher also enjoyed much success at club level with Mullinavat and at colleges’ level with St Kieran’s College.

According to Fr Maher’s biographer, Enda McEvoy whose book ‘The God Father’ was published in 2012 “the only tactic was technique”.

“And just about everything that a lifetime of hurling has deposited in Brian Cody’s brain was filtered, at some point, through Fr Tommy’s voice.”

“He encouraged handpassing. He insisted no ball be hit without a recipient in mind and, above all, demanded his players’ stickwork be oiled by endless practice,” he said.

Ordained as a priest for the Diocese of Ossory in 1948, at the age of 25 Fr Maher began his career as a young curate in Dublin before moving to St Kieran’s College in the 1950s where he worked initially as a Maths, Physics and Chemistry teacher.

He left St Kieran’s to become parish priest of Mullinavat in South Kilkenny where he remained until he retired in 1998.

Fr Maher’s health declined in recent years and he became is a resident at Archersrath nursing home outside the city.

His funeral mass took place in St Beacon’s Church in Mullinavat on yesterday and was followed by burial afterwards in the adjoining cemetery.

“Our earliest and perhaps fondest memories were when he visited us: at our homes and when we holidayed in his home. These were the occasions of ice cream, wafers and chocolate.”

“On reflection he may have been influenced by the loss of his own parents who both died when he was very young and he was raised by his Uncle Thomas and the extended Fowler family.”

“The resilience he developed as a child stood to him in later years as it gave him the ability to withstand setbacks and to find other routes to accomplish and to have a fulfilled life.”

“Fr Tommy had a tremendous capacity for work and he believed a shovel, a fork and a sprong were tools for vigorous use rather than supports during periods of rest. Those of us who had occasion to support his endeavours learned the difference between at pace and at full throttle during those intervals. He had a keen interest in power: electrical and mechanical. He enjoyed a certain facility as an amateur electrician, built on a night course he took in that area while otherwise engaged in his in Ministry in Sion Hill in Dublin.”

“He drove the tractor with relish, sometimes with speed, and had a selection of ploughs, harrows, lifters, grabbers, rollers, turners and spreaders for the variety of seasonal tasks performed during the farming year.”

“If you were wondering where to start on a job, his approach very much was start by rolling up your sleeves. He had overcome the paralysis of analysis.”

“He was central to the solemnisation of many family weddings and emphasised the sacramental nature of the commitments we were entering, while maintaining the essence of the celebrations for family and community.”

“This involvement brought us (and probably many others) closer together and fostered the relationships he had with our children in later years.”

“He also ministered to us and to many others when our parents departed for the next life, and he gave all those sacramental occasions the right mix between the sadness of physical loss and expectation of a better spiritual life ahead.”

“He was always fond of a good table and understood the importance of ensuring that those who worked hard needed to be properly sustained. I can still taste his specialty dish: boiled mutton with onions, root vegetables and potatoes, and some salt of the earth.”

“The motto of Maynooth where he studied for the priesthood was: Veritati Fir Fer: Truth, Strength, Courage. It is clear that he absorbed and lived by these values over the years. By his life he sought to transmit them to those he encountered and that is part of his legacy to us.”

“His love of Irish culture : lanuages games and song Tháinig sé, d’imigh sé agus d’fhill sé: he came, he left, and he returned: there are strong Christian echoes here.”

“Our greatest tribute to him would be for us to make moulds for ourselves and for the next generation that will sustain these firm aspirations.”

“Finally I leave you with a short verse, familiar to many, which expresses our hopes for this time of year, and these sentiments were certainly shared also by Fr Tommy.”