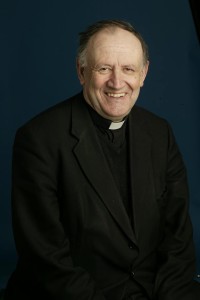 The Primate of All Ireland has led tributes to Bishop Anthony Farquhar following Pope Francis’ acceptance of his resignation.

In a statement on Thursday, Archbishop Eamon Martin of Armagh described Bishop Farquhar of Down and Connor as a “profoundly spiritual pastor” with an “innate understanding of the human condition”.

The Archbishop also paid tribute to his “God-given gifts of warmth, wisdom and empathy”, which he said “leave a lasting impression on all with whom he comes in contact”.

He said Bishop Farquhar was held in great affection by people throughout the country.

“He has touched many lives since his priestly ordination in 1965, and episcopal ordination in 1983, as a teacher, lecturer, chaplain and in the area of inter-Church and inter-faith relations.”

“A profoundly spiritual pastor, he has an innate understanding of the human condition, and his God-given gifts of warmth, wisdom and empathy leave a lasting impression on all with whom he comes in contact.”

“Amongst his many contributions to the Bishops’ Conference, and to the wider Irish society, I wish to acknowledge in particular Bishop Tony’s immense role in furthering ecumenism on the island. His engagement and work with our fellow Christian denominations, especially during the Troubles, was of enormous support to sustaining the nascent peace process.”

“I know that the leaders of the other Christian traditions greatly esteem his work for unity.”

Archbishop Martin highlighted that Bishop Farquhar had invested a large amount of his ministry in supporting Catholic education at primary, secondary and at tertiary level, drawing from his experience as a university lecturer and chaplain.

Bishop Farquhar was appointed Auxiliary Bishop of Down and Connor in 1983 and has been a bishop for 32 years – he is the longest-serving bishop in the country.

He has confirmed approximately 70,000 young people and would probably be best remembered for these ceremonies.

He often spoke to the young people about his motto: Sapientia Proficere (Increase in Wisdom) or as he would frequently translate it for them: ‘Grow up and Wise Up’.

His work outside the diocese was mostly in the field of ecumenism and he enjoyed a wide range of ecumenical friendships particularly that with the late Rev Ray Davey who founded the Corrymeela Community which celebrated its Golden Jubilee this year.

–          Bishop Farquhar served as an appointee of the Holy Father as a member of the International Anglican Roman Catholic Commission on Unity and Mission (IARCCUM).

–          Again he served as Roman Catholic Co-Chairman of the Dialogue between the Pontifical Council for Promoting Christian Unity (PCPCU) and the World Alliance of Reformed Churches (WARC).

–          Bishop Farquhar chaired the Commission on Ecumenism of the Irish Episcopal Conference when he steered it to take up its associate membership of Churches Together in Britain and Ireland (CTBI).

–          He served as one of the Roman Catholic representatives at the most recent Lambeth Conference of Anglican Bishops from around the world (2008).

–          In 2008 his ecumenical work was acknowledged in an ecumenical Festschrift with contributions from leading ecumenists in these islands and around the world including a contribution by Cardinal Walter Kasper.

In a statement, Bishop Noel Treanor also paid tribute to Bishop Farquhar stating, “Bishop Tony has served the Diocese of Down and Connor and the Irish Episcopal Conference faithfully for over 30 years, being one of the youngest bishops ever ordained in Ireland back in May 1983.”

“He has greatly contributed towards and will be best remembered for his involvement in the field of ecumenism and the promotion of understanding and reconciliation both nationally and internationally.”

“Indeed, it was within this ecumenical context that I first had the pleasure to meet Bishop Tony along with the late Dr David Stevens, former leader of the Corrymeela Community, having invited them both to address the European Conference of Bishops in Brussels on the subject of the role of the churches in reconciliation and peace building.”

“Over the past seven years of my ministry with him as bishops of Down and Connor, from the first moment of my arrival into the Diocese, I have experienced his warm support, pastoral wisdom, guidance and insightful knowledge of the diocese.”

“His many and impressive connections with the world of sport and the opportunities that these friendships have opened up for him were personal talents that I deeply appreciated as part of his pastoral vision.”

“On this day when the Holy Father, Pope Francis accepts the retirement of Bishop Tony, together with the priests and laity of the diocese and its parishes, I thank him for his years of faithful ministry and I pray that he will have many years of good health to enjoy his time of retirement during which he will continue to grace the parishes of the diocese with his smiling and hope-filled presence.”