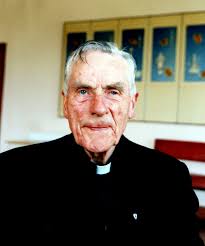 Leading environmentalist and missionary Fr Sean McDonagh recently paid tribute to the country’s oldest Columban priest who passed away in his 101st year.

Fr Dan Fitzgerald SSC celebrated his 100th birthday on 28 June this year and passed away on 10 August last after a short illness.

Originally from Old Blackrock Road, Cork City he had served in the Columban missions in China, Australia and Scotland before retiring to Nenagh in Co Tipperary in 1988.

After completing his theological studies, his first assignment was to the Philippines in September 1940, but war broke out and attempts to travel met with no success.

Eventually he was given a temporary appointment in the Cork diocese as chaplain to the Maria Reparatrix nuns.

Towards the end of the war he was assigned to Nottingham Diocese in England before moving to China in 1946.

Leading the tributes to Fr Dan was fellow Columban Fr Sean McDonagh. “He was an extraordinary man. We had some wonderful chats. You always went away happy from him.”

In his homily at Fr Dan’s funeral mass Fr McDonagh said, “Everyone remembers Fr Dan’s hospital visits and his few comments. He worked until he was 95 and played golf until he was in his 90s. Fr Dan beat the legendary Irish amateur golfer Jimmy Bruen to lift the Munster Cup on the 18th at Douglas Golf Club in 1942.”

Speaking of Fr Dan’s time as a Columban Fr Sean recalled, “Fr Dan died peacefully after saying the Rosary. He was the first Columban to reach 100 years. Fr Dan was one of the oldest surviving Columbans and was a direct link back to the founders of the society. He worked at one stage as secretary to Bishop Edward Galvin in China.”