Tributes for Fr Alec Reid: chaplain to the peace process 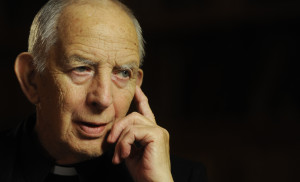 The future leader of the Irish Church, Archbishop Eamon Martin, has said the people of the island of Ireland “will forever owe Fr [Alec] Reid an immeasurable debt of gratitude for his tireless work towards building a civilisation of love and peace.”

In a statement issued in response to news of the Redemptorist priest’s death on Thursday morning, the Coadjutor Archbishop of Armagh said the first thing that came to mind when he heard the news was the Gospel line: ‘Blessed are the peacemakers, for they shall be called children of God.’

He also described Fr Reid as a “model pastor” and “a deeply spiritual priest who had a profound effect on everyone whom he met”, whose ministry was characterised by courage.

“He worked hard behind the scenes to build peace through patient and delicate negotiation. Guided by the Holy Spirit, he encouraged others to move forward, inch by inch, problem by problem, thereby gradually overcoming any obstacles and setbacks.”

He paid tribute to Fr Reid as a priest of great compassion who reached out to all those who were hurting and suffering.

“Always out of the limelight, he continued his patient and delicate peace work without seeking any personal credit or reward.”

Redemptorist, Fr Gerry Reynolds CSsR, who ministered with Fr Reid in Clonard monastery in Belfast described his confrere as “a very humble man, a very wise man, a very courageous and determined man who knew what he wanted to achieve and stayed with the task.”

A documentary broadcast on RTÉ Television in 2012 revealed the extent to which the peace process in Northern Ireland was due to the efforts of the Redemptorist priest.

In ‘The Secret Peacemaker’, Dr Martin Mansergh, a negotiator and former adviser to a number of Irish Taoisigh on Northern Ireland, revealed that Charles Haughey described Fr Reid as “the most important person in the entire peace process”.

In the programme, Fr Reid recalled the violent context which spurred his efforts to bring about discussions between Sinn Fein and the SDLP and to help them formulate principles that might break the deadlock. 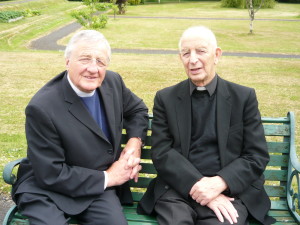 Methodist Minister, Rev Harold Goode, with whom Fr Alec Reid oversaw the decommissioning of some of the last weapons used in the Troubles.

Of the Catholic hierarchy’s outspoken condemnation of IRA violence, Fr Reid said that while he could understand that they had to make clear the violence was wrong, “it never did any good”.

He said that in order to have any chance of persuading the paramilitaries to stop he had to “talk to them, engage them, and point out how they could achieve their objectives through a peaceful strategy”.

He added, “I used to say I represent the next person who is going to be shot. That’s who I am.” Elsewhere he explained, “There was a great word we used to use in those days, the principle of the alternative.”

Recalling one of the most iconic images of the Troubles, when he delivered the last rites to two British Army corporals, David Howes and Derek Wood, who had been attacked by a Republican mob and killed by the IRA in March 1988 when they drove into the funeral procession of an IRA member Kevin Brady in West Belfast, the priest revealed that he had tried to shield the two soldiers before being ordered away by the IRA who then killed the soldiers.

The Tipperary-born priest also revealed that he was carrying the first papers from the Sinn Fein leadership paving the way for discussions with the Nationalist SDLP leader John Hume.

Fr Reid’s aim was to bring the paramilitaries to a renunciation of violence in favour of a negotiated settlement.

Through Fr Reid’s efforts these papers led to meetings between Gerry Adams and John Hume at the Redemptorist Monastery at Clonard, which stands on the interface between the Nationalist and Loyalist communities in Belfast. This in turn led to talks with the Irish Government. 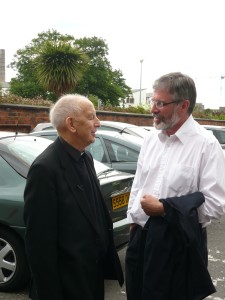 According to Sinn Fein leader Gerry Adams, “Clonard monastery was the cradle of the peace process and he [Fr Reid] was the mid wife, a very crucial figure”.

Speaking on Thursday, Gerry Adams described Fr Reid as the “chaplain to the peace process.”

Fr Reid didn’t limit his dialogue to the IRA, according to Fr Gerry Reynolds, CSsR, he ventured across the peace-line and built up connections with the UDA and people on the Loyalist Shankill.

One of his most enduring friendships was formed with Methodist Minister, Rev Harold Goode with whom he oversaw the decommissioning of some of the last weapons used in the conflict.

One of Fr Reid’s Redemptorist confrere’s gave the following tribute to CatholicIreland.net but asked for it to be anonymous:

Al was quite an extraordinary man. Most of his priestly life was spent in Belfast. He began working largely in the ecumenical apostolate that was undergoing serious change as a result of Vatican II. The Redemptorists had been active on that front since just after World War II when they organised the Mission for non-Catholics – more as an information giving thing than for directly converting, but the theology of the time was rather limited and far from inter-church. Al’s work in the post-Vatican II era became more inter-church.

He was capable of forming good relationships with people of all backgrounds: probably because they never felt threatened by his quiet friendliness. Even at the height of ‘the Troubles’, Al visited people he knew on the Shankill Road area behind Clonard.

He also was very much a friend of the Travelling people. When the first school for travellers was opened in Belfast he used pick kids up for school in the morning.

The outbreak of the Troubles was of course a nightmare. Many young Catholic men were rounded up and interned without trial – later Long Kesh was built as their prison. Several priests from the diocese, including the late Mgr Tom Toner, the bishop’s secretary, said Mass there. A lot of priests were required to celebrate as the prisoners were kept in units called ‘cages’ and were never allowed to come together as a single group which would have been the case for Sunday Mass in other prisons.

The Long Kesh system required that several priests would make their way around ‘the cages’ saying Mass in several of them each Sunday. Many prisoners, especially those from the Clonard area, knew and trusted Al and he became a messenger to family and friends, especially when as a result of protests, prisoners’ visiting rights were restricted. Having spent Sunday morning saying Mass, Sunday afternoon and evening was often spent ringing families to pass on messages.

Sometimes when political events were at pressure point, Al spent many a sleepless night walking around the Catholic area of Clonard, trying to bring with him some kind of peace. After a long night with little sleep, he said the first mass in Clonard church – in those days at 6.30. One more than one occasion, he dozed off when he sat down after communion. On one occasion, the man who was serving and probably guessing why he had napped, shook him gently and said in that direct way of Belfast men, “Father you would not mind finishing the Mass would you? We have to go to work!”

Al was not a great man for holidays. At most a few days away. A regular feature however of his year was at least one pilgrimage to Knock with a busload of women from the Falls. Many of them were themselves victims of the Troubles- sons or husbands in jail, children shot dead or injured in explosions, with the inevitable family and social breakdown that was the unspoken legacy of those deadly years.

Al sang to them on the bus (he had a lovely singing voice), prayed with them, heard their confessions and just talked to them and got their life stories. He may have said little, but they felt better because someone had listened to them without interrupting or telling them what they should be doing. Al was regarded as a holy man by those folk. Not in the conventional sense of holiness but a person of extraordinary goodness and generosity.

There was also the dreadful business of attending funerals of victims of the troubles. Al attended many of them – not all Catholic or Republican, let it be said. Attending funerals was not easy. It meant facing once more into the grief of families, sometimes even the hostility of friends of the deceased who might have questioned his motives for being there.

The peace process is a complex reality. Not everyone was in favour of it. It took Al’s persistence to win over many of them. Some became his champions. It might also be said that he was not without his critics in the Church. Some clergy (and bishops) believed he was too much of an apologist for the Republican side. It should be said, however, that Cardinal O Fiaich was a strong supporter and friend of Al’s and gave him comfort at delicate moments in the process.

The hunger strikes of 1981 were a particularly difficult time for him. There had been the long lead up of the blanket and dirty protests in Long Kesh to which he was exposed Sunday after Sunday. His health snapped and he had to take a break of several months in Rome. While he was there, he went one afternoon, Wednesday 13 May to be exact, to the Papal audience in St Peter’s Square during which an attempt was made on the life of Pope John Paul: Al was standing only yards away from where the pope was shot.

That picture that went around the world of him anointing the British soldiers shot during a funeral in Belfast in 1988 was another moment of crisis that made him even more determined to bring the peace process to a fruitful conclusion.

It is usually forgotten that that scene came at the end of a terrible series of events: the Gibraltar shootings of Mairead Farrell, Danny McCann and Sean Savage. All three were people with Clonard associations – I think both boys were altar boys in Clonard. Getting their bodies back for burial involved a lot of negotiations in which Al was a key figure.

Their funerals in Milltown Cemetery were the occasion when the Loyalist gunman Michael Stone opened fire killing three people. It was on the occasion of their funerals that Al got involved in the scene with the two soldiers. He had gone to the first funeral in St Matthew’s East Belfast and returned for the second in St Agnes’s. He was late but hoped to join the cortege from the church. When he arrived the place was in chaos: the soldiers had been taken away to Casement Park where they were shot and their bodies later brought to a patch of waste ground. An old lady told Al and he went to anoint them.

Blessed are the peace-makers: they shall be called the children of God.

May he rest in peace.