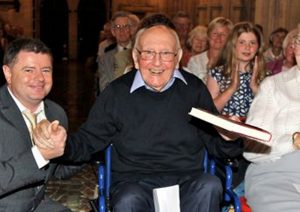 Dr Caird at launch of his biography in 2014 with author Aonghus Dwane.

The funeral service for the former Church of Ireland Archbishop of Dublin Donald Caird will take place on Monday (5 June) at 11 am in Christ Church Cathedral, Dublin, with burial afterwards in Enniskerry Churchyard.

Dr Caird was elected Archbishop of Dublin and Primate of Ireland in 1985, and held that position until his retirement in 1996.

The announcement of his death was made on Thursday 1 June by the Church of Ireland Archbishop of Dublin Dr Michael Jackson. “It is with intense sadness that we have learned today of the death during the night of the Right Reverend Dr Donald Caird,” he wrote.

“Dr Caird remained throughout his life a friend of all who knew him and of all he came to know. His affection for the people of Ireland and the Church of Ireland was unsurpassed. He loved the Irish language, was committed to it and excelled in it.”

Archbishop Caird engaged “personally, pastorally and intellectually” with his environment and with its priorities, said Archbishop Jackson. “This commitment extended into all parts of his interaction with church and society, cultural and political life. His personality was characterised by a radiance of engagement that gave him great delight in other people throughout a long and cherished life.”

The former Archbishop was 91 when he died. In recent years he lived at Brabazon House in Sandymount, Dublin. 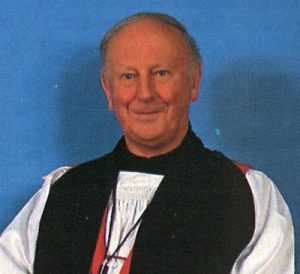 From 1970 to 1976, Dr Caird served as Bishop of Limerick and Killaloe. In his tribute to Dr Caird, the current Church of Ireland Bishop of that diocese the Rt Revd Kenneth Kearon recalled Dr Caird’s time as a philosophy lecturer (in Wales and Dublin) which fostered his love of ideas. “In meetings or in conversation he could be distracted joyfully from administrative procedures to pursue an important philosophical point, often drawing the listener to the writings of Immanuel Kant, the German philosopher on whom he was quite an expert.”

But above all, said Bishop Kearon, Dr Caird would be remembered as “a kind and caring” priest and bishop. “His wit and disarming charm belied a pastor and churchman with a clear vision for the Church of Ireland and its place, role and potential contribution to the shaping of modern Ireland. He was never more clear or animated than when he spoke of church and society and the essential interrelationship between the two.”

The Archbishop of Armagh and Primate of All Ireland the Most Revd Dr Richard Clarke said “Donald was loved and respected in equal measure and I wish to extend the sympathies of the Church of Ireland to Nancy and his family. May they know God’s comfort at this time of loss.”