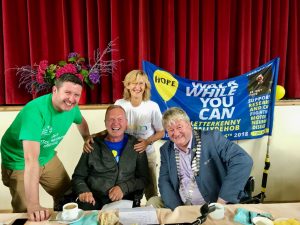 Tributes flowed following news of the death of Fr Tony Coote on Wednesday after a long illness.

The 55-year-old priest was diagnosed with motor neurone disease in February 2018.

In a statement, Archbishop Diarmuid Martin of Dublin expressed his sympathy to Fr Coote’s mother, members of his family and all those who supported him during his illness.

Dr Martin said Fr Tony “showed all of us how strength can be witnessed even in the face of human weakness.

“His courage and determination touched the hearts of people of all backgrounds. His courage leaves all of us more humble. May the Lord welcome and give him the deep peace to which he witnessed in his suffering.”

Roisin Duffy, CEO of the Irish Motor Neurone Disease Association, responded to the news stating, “From the moment he was diagnosed, Fr Tony Coote not only bore his illness with tremendous dignity, he also became a tireless advocate for everyone living with MND.”

Culture Minister Josepha Madigan tweeted on Wednesday evening of her devastation at the news. A parishioner of Fr Coote’s, the Minister added, “Not only was he an amazing, incredible man but a priest too. And a friend. A true beacon of light and inspiration, he turned a negative into a positive like only he could,” she said.

UCD Chaplaincy, where Fr Tony had served early in his ministry, tweeted: “It is with great sadness that we acknowledge the passing of Fr Tony Coote, former chaplain at UCD. May he rest in peace. He fought the good fight magnificently, particularly in these last months of his illness. Leaba i measc na naomh go raibh aige.”

Journalist Sorcha Pollak tweeted: “Very sad to hear of Fr Tony Coote’s death.” She highlighted that “One of his incredibly generous gifts was to help transform the lives of a Syrian family” who arrived in Ireland a few years ago.

One member of the family, Nour Aljarad, scored more than 600 points in her Leaving Cert this summer. Her family left Damascus in Syria in 2014 and arrived in Ireland, with little English, to start life again.

In November 2015 their plight was written about by Sorcha Pollak in the Irish Times series ‘New to the Parish’. Stillorgan–Kilmacud parish offered the family housing and schools.

Writing in the parish newsletter in 2016, Fr Coote explained that the initiative “was sparked by the death of four-year-old Alan Kurdi, whose body was found on a beach after the boat that he and his family were escaping in capsized off the coast of Turkey”.

It began with a 550 km walk from Donegal to Cork which he did in his wheelchair. He was accompanied by a band of walkers which included his brothers and other family members as well as former students from UCD.

The “Walk While You Can” pilgrimage was filmed and made into a documentary ‘Walking the Walk’ which aired on RTÉ television. It followed the priest’s inspirational journey and showed how parish communities turned out in force along the way to offer hospitality, financial support and goodwill.

In the documentary, when Fr Tony was told he was carrying a very heavy cross, he responded: “In a way it is a heavy cross, but I don’t feel that I am carrying it alone; I feel that Jesus who went before me is in some way lifting the burden of the cross. I believe if we are in some sort of boat of life in a stormy sea, we are not on our own – I don’t think that we are cast adrift. I think that was the meaning of Jesus Christ being on earth, to demonstrate that God wasn’t distant.”

Fr Coote was the eldest of four boys. His parents split up when he was 12 and he saw how his mother, who is now 80, became socially isolated. “All the invitations to the dinner dances stopped.”

Her ostracisation in the conservative Ireland of the 1980s gave him “an eye for suffering and an eye for understanding people and families and what they were going through. Not judging them because we were judged. It definitely opened my heart to people.”

He never thought he would become a priest but gave it a chance and entered a seminary in 1985. His family and parish were supportive.

Fr Coote is survived by his mother, Patricia, and his brothers, David, Kieran and Pat.

His removal will take place on Sunday, 1 September to the Church of St Laurence O’Toole, Kilmacud, arriving at 6 p.m.

Fr Tony’s Funeral Mass will take place on Monday, 2 September at 11.30 a.m. in the Church of St Thérèse, Mount Merrion.