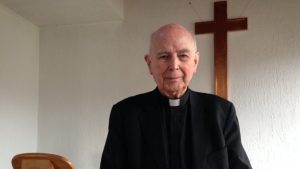 St Eugene’s Cathedral in Derry was packed to overflowing on Thursday for the funeral Bishop Edward Daly.

At the start of the Mass, Mgr Amaury Medina Blanco, Chargé d’Affaires at the Apostolic Nunciature in Ireland read out a message of “heartfelt condolences” from Pope Francis.

The Pontiff paid tribute to Bishop Daly’s generous and dedicated episcopal ministry in the service of peace and justice.

In his homily, the current Bishop of Derry, Bishop Donal McKeown described Bishop Daly as “one whose ministry has been an instrument of God’s peace for so many people”.

He said it had been a privilege to stand at the door of the Cathedral over the last three days and hear stories of invaluable acts of kindness, both great and small.

“The people of the diocese – and beyond – held Bishop Edward Daly in the highest regard for his loving faithfulness to them over a period of 59 years as priest and bishop in this diocese,” he said.

Dr Daly’s ministry was marked by total dedication to the people he served, wherever he was called to minister. That dedication was visible in outstanding courage.

“He showed physical courage on Bloody Sunday and his moral courage was evident in his passionate struggle against violence and injustice from all quarters. It takes enormous courage to be a peacemaker and he was an apostle of mercy, whether as a curate, as a bishop or as chaplain in the Foyle Hospice.”

Dr McKeown continued, “In a fragmented and often self-centred world, there is still a huge need for that sort of dedicated and selfless service. The crowds who have come here over the last few days show that they value loving, courageous, generous spiritual leadership.”

Likening Bishop Daly to St Peter, he said he would often find himself in situations and places where he would rather not have gone – places of pain, loss, injustice, confrontation and incarceration.

“In those places, blessed are the merciful. Like Veronica and Simon of Cyrene, thrust into the limelight on the way to Calvary, he knew that carrying an unjust cross with others was painful. But he continued to give of his all that the sheep might be fed and built up.”

A key element of his peacebuilding was his growing friendship with other church leaders.

In his early years as Bishop, he accepted the ground-breaking invitation to attend the consecration of the young Bishop Robin Eames.

He then had a long friendship with Bishop James Mehaffey, who became bishop here in 1980.

“Their courageous work and real friendship were key factors in building up relationships across the diocese. They attended as many events and occasions as possible together, as a mark of unity and a sign of hope. Today, we are immensely grateful for that legacy.”

At the end of Mass, the Primate of All Ireland, Archbishop Eamon Martin said many tributes have been paid to him; countless words have been written, reflecting on his immense contribution to the life of Derry city and diocese and to peace and justice in Ireland; above all, the people who knew and loved Bishop Daly have been able to share stories of him and tell their children and grandchildren about the caring ministry of a great priest and bishop.

“While many hearts are hurting in Derry and around Ireland this week, we are consoled in being able to say we knew a good and faithful servant of the Lord,” Archbishop Martin said as he recalled standing in the very spot in St Eugene’s Cathedral when Bishop Daly ordained him to the priesthood 29 years ago.

“I’m thinking: if only I could be even half the priest and bishop that he was, I know I’d be serving God well. Well done and thank you Bishop Daly, good and faithful servant. Go now and receive in God’s mercy the reward that He has prepared for you.”