Home > Featured > Tributes to Archbishop Clarke as he retires

Tributes to Archbishop Clarke as he retires 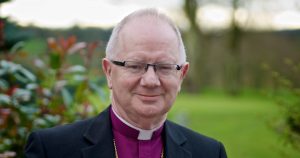 Most Revd Dr Richard Clarke who has retired as Archbishop of Armagh and Primate of All Ireland.

Tributes have been paid to Archbishop Richard Clarke who officially concluded his ministry as Church of Ireland Archbishop of Armagh and Primate of All Ireland on Sunday.

As a facilitator of dialogue between member churches, and a representative of the inter–church structures in the public square, “he set a tone for reasoned debate and honest engagement that reflected the Christian call to be good neighbours. We wish him every blessing in his well–earned retirement,” Bishop Brendan Leahy and Rev Brian Anderson said in a joint statement.

They said Archbishop Richard brought “heartfelt commitment” to the work of the Irish Inter–Church Meeting.

They also noted that his leadership in deepening relationships between the Christian churches on the island of Ireland began long before his appointment Archbishop of Armagh, and drew on his significant international experience in ecumenical dialogue.

“His insightful contributions have helped shape the evolution of the national inter–church structures, emphasising the value of friendship and good personal relations at the heart of our shared Christian witness to a society in need of hope–filled pastoral support.”

Archbishop Clarke was President of the Irish Council of Churches and Co–Chair of the Irish Inter–Church Meeting from 2010–2012.

On Sunday, Archbishop Clarke was joined by a large congregation in St Patrick’s Cathedral in Armagh, including all serving bishops of the Church of Ireland, for a celebration of the Eucharist.

In his sermon, Dr Clarke spoke about the importance of Candlemas – the Feast of the Presentation of Christ in the Temple – which concludes the season of Christmas.

Members of the congregation gathered afterwards for a reception in the Alexander Synod Hall where presentations were made to the Archbishop.

Archdeacon Terry Scott told the Archbishop, “You have shown us great kindness and generous hospitality. You have opened your home to us on many occasions and frequently been with us in our parishes and rectories. You’ve made the effort and taken the time to get to know us and stood beside us on those occasions of great joy or heart–breaking sadness.”

He added, “You have been yourself and encouraged us to be ourselves, and we’ve loved you all the more for that. You’ve sought to build up our confidence in ourselves and reminded us by word and example that the call we’ve each received from God is a gift to be cherished – and you’ve been great fun.”

In his address, Archbishop Clarke thanked God for almost 45 years of ordained ministry and “for the adventures and the experiences that I’ve had over those years”.

He said of his seven years in Armagh that they were “years that I will treasure forever.”

He had firstly envisaged his primacy as “the Armagh project” but soon realised it was “the Armagh adventure” and came to value the kindness, acceptance and generosity he had received from every part of the diocese.

Of his collaboration with Archbishop Eamon Martin, who attended the reception, he recalled that he had “arrived at roughly the same time, both as blow–ins” but they had got to know each other very quickly.

On Sunday, Archbishop Martin tweeted, “Honoured to attend the Candlemas Service to mark retirement of my good friend and brother in Christ, Archbishop Richard Clarke. Will miss his friendship, support and cooperation. Wish him the blessing of health and happiness for the future!”