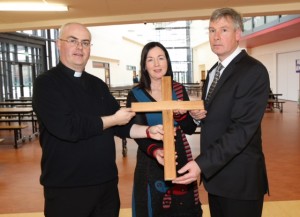 A new Co Waterford secondary school has been given the thumbs up from its local parish community in the form of a special wooden cross.

The cross, which represents 150 years of parish life through the parish church, was presented to Ardscoil Na Mara in Tramore at a recent Mass.

“The students and staff came to the Mass and we presented the cross to them,” curate Fr Michael Toomey told CatholicIreland.net.

“It was symbolic – from the old church to the new school building. The wood of the cross is there between the two as a support to each other,” Fr Toomey said.

Fr Toomey celebrated the Mass. He explained that the cross was created by one of the builders who was involved in a roof project on Holy Cross Church in 2011.

This was a major €1.5 million re-roofing and re-pointing project. The wood of the cross was taken from one of the original frames which had held up the church for over 150 years.

“It was a physical part of the church, it is a physical symbol of an ongoing spiritual formation,” Fr Toomey said.

He added that the gift of the cross shows the commitment of the parish community to the new school, Ardscoil Na Mara, “for many generations to come.”

Pupils and teachers were present at the Sunday Mass when Fr Toomey blessed and presented the principal Padraig Cawley with the wooden cross taken from the original roof structure of Holy Cross Church and which dates from 1860.

The cross will be placed at one of the entrances of the school which opened last September. A plaque will also commemorate the presentation.

The school had a packed week of activities for its first Catholic Schools week at the end of January.

Activities included daily prayer reflections by the students, staff greeted on their log in screens with a simple prayerful reflection, and a fun treasure hunt with clues and answers to questions about the faith. 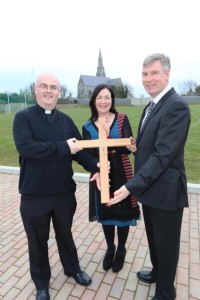 Ardscoil Na Mara was the name chosen for the new catholic voluntary secondary school which came about following the amalgamation of Stella Maris and CBS Tramore.

It is supported by the Edmund Rice Trust and Sisters of Charity.

It will educate students from Tramore and the surrounding area but above all it wants to foster communication and co-operation among students, teachers, parents, board of management and community at large as well as encouraging inclusiveness.

In a statement on Tuesday, Fr Tom Deenihan, General Secretary of the CPSMA, said his organisation along with their colleagues in the INTO had been engaging with the Minister’s officials for some time in relation to this initiative.

“The issue of small schools is a critical one for local communities, teachers and management, impinging, as it does, on both the areas of pedagogy as well as health and safety,” he said.

He acknowledged that the number of small schools has increased greatly in recent times and most of these schools are in rural areas.

“Today’s announcement, which should be welcomed by all, will alleviate, in some way, concerns that are held in these communities,” Fr Deenihan stated.

He said the reduction in the retention figures for the second, third and fourth teachers is a positive step and will make a real difference to many schools.

“Of greater importance is the further reduction for rural schools that are located more than 8km from another school of the same patronage in respect of the second teacher.”

The CPSMA spokesman said the concern about the increase of one teacher schools is shared by the INTO and CPSMA.

“The reduction of the retention figure to 15 pupils will reduce the number of one-teacher schools in Ireland. That must be welcomed.”

He added, “It also represents a protection for the ethos and patronage of these small, isolated schools that serve their communities.”

He explained that for some time now, CPSMA with the INTO, the Church of Ireland Board of Education and the Department, have been discussing a voluntary protocol in relation to schools that wish to amalgamate or close.

“The nomination of a single contact person within the Department is enormously helpful,” Fr Deenihan commented in his statement.

The pro-active approach of the Department to write to school patrons when enrolment decreases to twenty-five pupils should allow for a structured discussion locally on the viability of the school or the desire to amalgamate with another such school, he said.