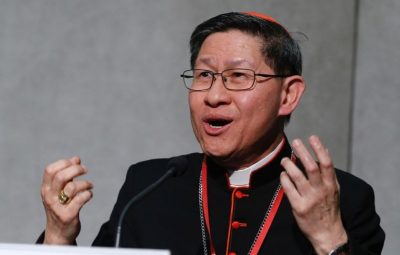 Cardinal Louis Tagle, prefect for the Congregation for the Evangelisation of Peoples.

The keynote Trócaire Lenten Lecture which the Prefect of the Congregation for the Evangelization of Peoples, Cardinal Luis Antonio Tagle, was due to deliver in Maynooth this evening has been cancelled over the Covid-19 crisis.

The Cardinal was due in Dublin on Monday to lead an evening of prayer and reflection with members of Young Church Dublin at St Paul’s on Arran Quay.

But on Sunday, the Archdiocese of Dublin announced that due to the Coronavirus outbreak, the Cardinal was advised “not to travel at this time”.

Trócaire later confirmed that its Lenten Lecture would not go ahead as guest speaker Cardinal Tagle had been advised not to travel from Rome due to COVID-19 restrictions in Italy.

The news came on the day that the Government cancelled all St Patrick’s Day parades around the country following advice from the National Public Health Emergency Team. The move is aimed at limiting and slowing down the spread of the virus.

The Government also agreed an aid package of €3bn to deal with the public health and economic impact of the virus.

Separately, Independent Senator Ronán Mullen has expressed concern about the Government’s approach to the Coronavirus/COVID-19 outbreak and said more public attention must be drawn to containment measures aimed at older members of the community.

“Government action is vital and necessary, but it must also be targeted to vulnerable demographics who are proportionally at greater risk of adverse outcomes. International evidence so far has shown that Coronavirus is a relatively benign disease for the young, but a very serious one for the elderly and the chronically ill,” the Senator said.

“Even in China, which has faced a major outbreak of the virus, the indications are that there were no casualties at all for children under the age of 10, and the mortality rate among adults under the age of 70 was just 0.4%. All of the victims onboard the “Diamond Princess” cruise ship were over the age of 70. This strongly suggests that the elderly, and other at risks groups such as immune-suppressed and those with chronic respiratory conditions, are far more susceptible to this disease,” he warned.

Senator Mullen called on the Government to direct a large proportion of its resources towards protecting these groups who are more at risk of becoming critically ill from the virus.

“While maintaining a focus on schools and sporting events, the Government should focus intensively on hygiene and isolation within nursing homes and hospitals.”

“In addition, a significant proportion of those over the age of 70 who contract the virus will need respirators or concentrated oxygen. This will put a major strain on resources in our hospitals, and the Government needs to assess urgently whether sufficient equipment exists to deal with a sudden upsurge in demand.”

He added, “Without urgent and focused measures in the short term, these huge gaps may take a heavy toll on the ability of our health system to contain this outbreak.”

The charity Alone has launched a helpline number for older people who have concerns about coronavirus. The support line is open Monday to Friday from 8am until 8pm on 0818 222 024.

Three newly discovered cases of coronavirus were reported in Ireland on Monday, bringing the total of confirmed cases in the Republic to 24. Global cases have exceeded 110,000.

At Government Buildings, the Taoiseach Leo Varadkar said it was “possible we are facing events that are unprecedented in modern times”.

Mr Varadkar added that the spread of Covid-19 cannot be stopped but it can be slowed and that it warrants a societal response as well as a medical response.