“Tolerance is never the fruit of rejection of the other” 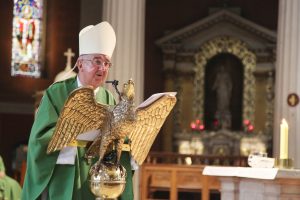 Archbishop Diarmuid Martin of Dublin has defended the role of the Catholic Church in Irish education, warning that to remove the Church totally from the sphere would lead to an impoverishment of pluralism.

In his homily at St Patrick Campus (DCU) for the opening of the academic year, the Archbishop said, “Religion gives believers an integrated vision of life that today’s splintered society needs.”

Addressing the place of religious education in the growing diversity in education emerging in Ireland, he said, “Ireland is a country marked by cultural change and in a particular way by change in the religious culture of the country.”

He stressed that a pluralist society is not one of negative confrontation but must be one where there is open, honest, respectful and searching dialogue between different viewpoints in the quest for common purpose.

Dr Martin stressed that he was not saying that the current situation, in which one Church dominates the patronage of such a large portion of Irish education, should continue.

“Quite the opposite. I have said on more than one occasion that it is an anachronism inherited from the past. Indeed, such a near-monopoly position for the Catholic Church is anything but healthy. Removing the Church entirely from the world of education, however, can be in some cases the fruit of a deliberate misreading of Irish history.”

Underlining that tolerance is never the fruit of rejection of the other, the Archbishop – who is patron of up to 90 percent of primary schools in the wider Dublin area – said. “Our young people need to be taught to live with respect and to appreciate what is at the roots of the values and commitment of others.”

He proposed two examples of how to bring out more effectively the contribution of Catholic education in the future.

The first proposes a return to the mission of the Church and to the charism of great founders and foundresses of religious congregations in radically reaching out to the poor.

“I am thinking of the work that can be done to help young people who find themselves educationally disadvantaged. I think of the inadequate response to the needs of young people on the autism spectrum. I think of those who in areas where poverty and marginalisation are dominant and where lack of opportunity means that intelligent, bright talented young people never get beyond the starting posts. This is where the Church’s educational presence should be in the front line,” he said.

He noted that the Grow in Love programme has evoked positive or enthusiastic reactions in schools and in families.

“It is a programme that stands on its own merits educationally. Above all, it is a programme focused on the person of Jesus revealed in the scriptures, moving away from earlier programmes that were overly focused on formulations and norms,” he said.

He acknowledged that there are reasons why many people in Ireland have lost confidence in the ability of the Catholic Church to act as a moral guarantor in tomorrow’s Ireland.

However, the Archbishop of Dublin emphasised that there is another side to the Church, which must be recognised.

This included a sense of community and care for the marginalised, which is not the monopoly of a few well-known figures in the Church,

“The history of the Catholic Church is not just the history of haughty and power-controlling prelates distant and indifferent from the lives and sufferings of ordinary lives.  It is the history of ‘extraordinary–ordinary’ figures of priests and religious. It is the story of families who have lived and transmitted what is striking and meaningful in the teaching of Jesus Christ. It is the story of great teachers who wished to share their own experience of Jesus, not as ideology, but as lived commitment to what is good and true and loving,” Archbishop Martin said on Tuesday.

He also paid tribute to those in schools who witness day after day to the message of Jesus Christ and earn the respect and affection of children, parents and colleagues.

“They unassumingly continue even when they feel that they are sometimes unjustly almost harassed because of the defects of others,” he said.