Home > Featured > “Tireless and selfless peacemaker” is laid to rest

“Tireless and selfless peacemaker” is laid to rest 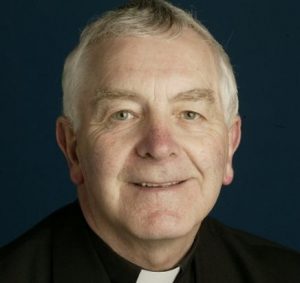 The former Primate of all Ireland, Cardinal Séan Brady, has paid tribute to his fellow bishop and close friend Bishop Gerard Clifford, who died on Monday of this week.

Bishop Clifford died after a four-year illness during which he endured great pain and suffering “with amazing strength and dignity – without complaint or self-pity, uniting his suffering to the sufferings of Jesus Christ.”

Cardinal Brady was giving the homily at the funeral Mass at the Church of Saint Patrick, Dundalk, Co Louth at 12.00 noon yesterday. During the Mass, the chief celebrant, the current Primate of All Ireland, Archbishop Eamon Martin, read a message which Pope Francis had sent for the funeral.

The Holy Father was saddened to learn of the death of Bishop Gerard Clifford, went the message, which assured clergy, religious and lay faithful of the Archdiocese of Armagh of his “heartfelt condolences”.

“United with you in prayerful thanksgiving for his generous and dedicated episcopal ministry in the service of education and ecumenism”, the Pope joined those present at the funeral, commending Bishop Clifford’s soul to the Father’s merciful love. The message concluded: “Upon all who mourn Bishop Clifford’s passing, Pope Francis cordially imparts his Apostolic Blessing as a pledge of peace and consolation in the Lord Jesus Christ.”

In his homily Cardinal Brady told the packed church that Bishop Clifford had chosen as his motto ‘That they may be one’ from the Farewell Prayer of Jesus for the disciples at the Last Supper. “His choice reflected his interest in promoting the unity of Christians and his desire to devote his energy to that task,” said Cardinal Brady. “But I think we can also see that it represented his desire to work for greater communion in our own Church for a Church where more and more people would have the attitude and mind of Jesus Christ, where people are of one heart and mind – looking out for one another’s interest.”

Cardinal Brady said that “Certainly that is how he lived his own life – as a tireless and selfless peacemaker, an earnest and dependable bridge-builder.” He was “A man of remarkable good sense and sound judgement [with] the ability to listen respectfully and respond graciously.”

Bishop Clifford, born in 1941, was ordained in 1967. He was Director of Religious Education in the Archdiocese of Armagh from 1969 to 1979. “He was acutely aware of the importance of religious education,” said Cardinal Brady. “He teamed up with many others – priests and laity – to provide a top class advisory service in religious education at a time when it was badly needed.”

Fr Clifford’s interest in ecumenism, which was so decisive for his life, stretched back to his student days, when his theological degree was awarded for a study of ministry in the Anglican Church. After Pope Saint John Paul II’s visit to Ireland in 1979, he was a natural choice to be part of the Catholic Church’s response to the pope’s invitation for the churches to work more closely together.

Working in close co-operation with fellow clergy from other churches, in particular Canon William Arlow, he organised ecumenical talks twice a year between the diocese and Saint Anne’s Cathedral, Belfast, and inter-church services in Armagh Cathedral during the Week of Prayer for Christian Unity. In 1984 Fr Clifford was appointed first full-time executive secretary of the Irish Bishops’ Conference and ordained bishop in 1991. As a bishop, he served as a member of its Council for Ecumenism. He was a member of the Episcopal Commission for Pastoral Care, and President of CURA from 2010 until 2013.

In his spare time Bishop Clifford, described by Cardinal Brady as “a dear friend, a good and faithful priest and an outstanding brother bishop”, had a great love of gardening, painting, and walking in the foothills of the Cooleys.

“Now that the curtain has come down on his personal life on earth, we ask the Lord to draw back the other curtain to let him see the light of eternal day. There every tear will be wiped away and that other garden – the Garden of Paradise – will be revealed. The vision will be infinitely more glorious, where even the splendour of the Cooleys and Dundalk Bay will have to take second place!” he concluded.