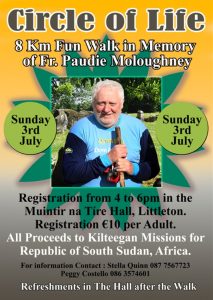 A walk-loving missionary priest who touched the lives of many people in his native parish in Co Tipperary is to be remembered with a special event next weekend to mark the first anniversary of his death.

Fr Paudie Moloughney SPS, who was a member of the St Patrick’s Missionary Society based in Kilteegan in Co Wicklow, passed away on 3 July 2015 aged 67.

During his missionary life he had worked mainly in Brazil and for a time in Nigeria.

A native of Laharden in Littleton Co Tipperary, Fr Paudie loved walking and was a regular on the Camino in Spain.

He also completed the Appalachian Trail in the US, the longest hiking trail in the world which is 2,200 miles long and passes through 14 American states.

Each day he was on the Appalachian trail, he kept a diary and each day he remembered and prayed for dear friends deceased and living back home in Ireland and throughout the world.

Speaking about Fr Paudie, friend and committee member Matt Purcell said, “He is sadly missed by the parishioners of Moycarkey-Borris parish, who grew to love him over the years, primarily because of his Godliness and his simplistic approach to life, where love and caring for your fellow man underpinned this philosophy.”

To honour the memory of Fr Paudie on his 1st anniversary, a small committee have come together to pool their thoughts and ideas on how best to commemorate him.

It was decided that a walk would be held on Sunday evening 3 July with a start time of 6pm.

Registration will take place from 4pm in the Muintir Na Tire Hall in Littleton.

It is hoped walkers will pay a €10 registration fee, the proceeds of which will go to the chosen charity, the Kiltegan Fathers’ Mission for the Republic of South Sudan.

The 8km walk route will reflect a walk that Fr Paudie regularly made to say Mass in Littleton and Two Mile Borris.

The theme of the walk ‘The Circle of Life Walk’ was chosen for Fr Paudie’s ruby anniversary of his ordination in 2011.