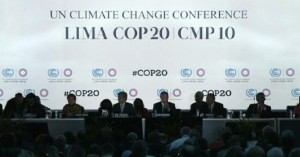 In a letter to the international climate change conference in Peru, Pope Francis warned starkly that “The time to find global solutions is running out.”

In his message to Manuel Pulga Vidal, Peru’s environment minister and President-Designate of the Conference or COP 20, the Pontiff warned “There is therefore a clear, definite and urgent ethical imperative to act.”

He said, “The effective fight against global warming will be possible only with a responsible collective response that is free from political and economic pressures.”

The Pope noted that the conference was taking place on the coastline adjacent to the maritime current of Humboldt, which unites the peoples of America, Oceania and Asia, in a symbolic embrace and which plays a key role in the climate of the entire planet.

The consequences of environmental change, Pope Francis said remind us of the severity of neglect and inaction on this issue.

A collective response, the Pontiff added, is also one that is able to overcome mistrust and to promote a culture of solidarity, encounter and dialogue.

Negotiators from 195 countries are gathered for the conference in Lima, which began on 1 December, to hammer out details of a new international agreement to reduce emissions of greenhouse gases that cause global warming. The meeting concludes today.

The impact climate change already has been having on coastal regions and other areas “reminds us of the seriousness of negligence and inaction,” Pope Francis said. “It is morally imperative that people act.”

Fr Seán McDonagh, SSC writes from Lima on: The Significance of Tibet in the Climate Change Debate

In the climate change debate, small changes can have enormous consequences.

Many would consider the increase of carbon dioxide in the atmosphere from 280 parts per million (ppm) in the period from the end of the last ice-age to 400ppm in 2013 to be a small change, and yet the consequence even now for people in the Philippines who have experienced super typhoons such as Haiyan (November 13) and Hagupit (2014) are horrendous.

Small countries such as Tibet in Asia can also play a crucial role in climate change.

Tibet is often called ‘the roof of the world’ because it is the highest country in the world.  It is also home to more than 46,000 glaciers covering 105,000 square kilometres which store more fresh water than any place in  the world apart from the Arctic and Antarctic regions.

This is why the Tibetan plateau is sometimes called the ‘Third Pole.’

It is also often referred to as the ‘Water Tower’ of Asia because its glaciers feed the major rivers of Asia– the Indus, the Ganges, the  Brahmaputra, The Salween, the Mekong, the Yangtze and the Yellow river.

Unfortunately, the glaciers on the Tibet Plateau are warming twice as fast as in many other parts of the world.

This has led to extreme weather conditions in many parts of Asia, but most of all scientists fear of what will happen if the glaciers in Tibet are reduced significantly in the coming decades as a result of global warming.

Reports claim that Tibet’s glaciers have shrunken by 6,600 square kilometres in the past 40 years.

If the warming in the area continues, there is the credible fear that water flow in the rivers which depend on glacial met will become seasonal with horrible consequences for hundreds of millions of people who will be deprived of water for weeks or months each year.

Another consequence of warming is the increase in the number of glacial lakes in the Himalayan region which for as the ice is melting.

It is now estimated that there are now more than 8,790 glacial lakes with more than 200 classified as potentially dangerous.

When glacial lakes bursts, a tsunami of water and icea cascades down stream into the lowlands wiping out houses, road and  bridges. This brings death and misery to tens of thousands of people.

Permafrost covers much of the Tibetan highlands and according to reliable estimates it stores about 12,300 million tons of carbon and methane.

Further warming will degrade the permafrost and release dangerous amounts of carbon and methane into the atmosphere, thus intensifying climate change around the globe.

In recent years the melting of glaciers and permafrost has destabilized many hillsides causing huge landslides.

In 2003, for example, a landslide created a dam which completely blocked the Pareechu river, a tributary of the Sutlej river. Eventually, the dam burst in 2005 causing severe destruction to infrastructures s in both Tibet and India. As a result many people lost their livelihoods.

Because of warming a 2007 report from the United Nations Development Programme (UNDP), claimed that Tibet’s grasslands are turning into deserts at the rate of 2,330 square miles per year.

This is affecting pastoralists and their herds who, because of their extensive knowledge of the dynamics of grasslands, have grazed them sustainable for 8,000 years.

So, every aspect of life in Tibet has and is been affected by climate change. The consequences, particularly as warming intensifies. will be catastrophic for the natural world and tens of millions of people who live in Tibet and south Asia.