Home > Featured > “Time has come for Europe to look ahead”: Cardinal Marx

“Time has come for Europe to look ahead”: Cardinal Marx 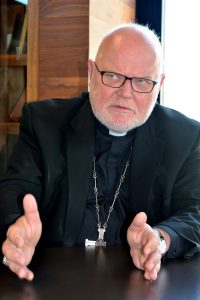 The President of COMECE, the Commission of the Bishops’ Conferences of the European Community, has described the vote for Brexit by the majority of British voters as “extremely regrettable”.

In a statement on Monday, Cardinal Reinhard Marx, described the European Union as a project of community and solidarity.

“A conscious withdrawal of a member is therefore painful and has consequences for all. The existing cultural and spiritual ties should be preserved, used and reinforced in the future.”

But he also said Europe goes beyond the European Union.

“This decision of the British voters should of course be respected,” he appealed and said that after the referendum, the “time has come for Europe to look ahead”.

He said subsequent steps in the concrete negotiations on the withdrawal of the UK and its modalities require responsibility and the right sense of proportion from all parties concerned.

“The most helpless and the most easily vulnerable, in particular, may not be victims of this process, neither in the United Kingdom nor in the European Union.”

Elsewhere in his statement, Cardinal Marx, who is one of Pope Francis’s Council of Nine, said the decision of the British electorate confronts the European Union and its Member States with questions about their goals and their tasks.

“The European Union needs a new departure. We need to ‘rethink’ Europe in some way. The deliberations on the future development of the European Union must therefore take place on a broad social basis.”

“Europe and the EU are a task for all, because we will only be able to build a good future if the nations of Europe are united.”

He added that it also raises the question on the way to achieve the “true European humanism” to which Pope Francis has encouraged the Europeans in his speech at the Charlemagne Prize Ceremony.

The COMECE president said the Church wants to contribute to this necessary debate on the future of Europe.

In October 2017, COMECE is to organise a Congress on the occasion of the 60th anniversary of the Treaties of Rome in order to provide religious impulses for the debate on the future of the European Union.

But he stressed that the European Union must not get stuck in the self-reflection.

“Whether together or side-by-side: the European peoples and nations have a moral responsibility towards the world, the poorer countries, the integrity of creation and the reduction of climate change.”

“The rule of law and the prospect of a life in peace and a high standard of living make Europe a pole of attraction for many people. The EU must also meet this global responsibility under the changed political conditions.”

Cardinal Marx also warned that the “increasing nationalism in some countries must not become again the trigger of ideological delimitation, hostility and discord. As Church, we will commit ourselves to this with full force.”

Cardinal Marx was in Dublin last week to give a keynote address on ‘The Church and the Challenge of Freedom’ at an international conference hosted by the Loyola Institute in Trinity College Dublin.

The overall theme of the conference was ‘The Role of the Church in a Pluralist Society: Good Riddance or Good Influence?’

Speaking to journalists after his address, the German Cardinal spoke about the refugee crisis and warned that one country cannot not solve all the problems.

“Europe is surrounded by very precarious situations – Russia and Ukraine, the Middle East, Turkey, Syria, Libya and all of Africa – so the future of the migration will be very dangerous.”

He reiterated his call for every migrant who arrives in Europe will be treated with respect of human dignity; to have a fair process by which his situation is assessed; that no one is sent back to a situation of persecution or war and that more must be done to stop the deaths of between 3-5,000 people in the Mediterranean every year.

The Cardinal said there was still an openness in German parishes to welcome people but the discussion was much more difficult within society.

“But the majority will accept these points I outline but how we manage it is a political discussion,” he said.