Remember    There has never been anybody who has spoken like him. (Jn 7:46)

Several people who had been listening to Jesus said, ‘Surely he must be the prophet’,
and some said, ‘He is the Christ’.  Others said, ‘Would the Christ be from Galilee?
Others again said ‘There has never been anybody who has spoken like him’.
One of the pharisees, Nicodemus, the same man who had come to Jesus earlier – said to them,
‘But surely the Law does not allow us to pass judgement on a man without giving him a hearing and discovering what he is about? 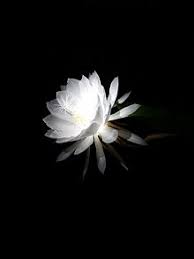 In some parts of the world there is a cacti flower which blooms only in the dark, and its scent fills the night air. It is called a Night-blooming cereus. Its effect is unexpected, as is its beauty. The light of God is something similar – shining within the darkest night, a light which shines in the middle of all human darkness. Nicodemus for safety reasons came to Jesus at night and got a huge surprise. Jesus taught him that the light of God is found in every human soul.

In the space we make for prayer, this light of Jesus can be turned on. His words were powerful because he was utterly convinced of all he said. He spoke from the heart, words that came from the very heart of God. When we speak with love we speak with power.

“Amazing Grace” is the Christian hymn written by English poet and clergyman John Newton (1725–1807) and published in 1779. He wrote the words from his personal experience, particularly as a slave trader.
He grew up without any particular religious conviction but his life’s path was formed by a variety of twists and coincidences. He was pressed into the Royal Navy and traded to a slave ship where he began a career in slave trading. One night a terrible storm battered his vessel so severely that he became frightened enough to call out to God for mercy, a moment that marked the beginning of his spiritual conversion. It was a moment of conversion and a new vision for his life.
He quit going to sea altogether and began to study theology, sin and grace. He wrote the words of the hymn ‘Amazing Grace‘ as an act of penance and gratitude.

Amazing grace, how sweet the sound
That saved a wretch like me
I once was lost, but now I am found
Was blind, but now I see

Through many dangers, toils and snares
We have already come
‘Twas grace has brought us safe thus far
And grace will lead us home