Home > Featured > Boxers fight for religious freedom in the US

Boxers fight for religious freedom in the US

The son and former wife of heavyweight boxing legend Mohammed Ali have launched a ‘Step into the Ring’ campaign with three of the world’s best known boxers to promote religious freedom in the United States.

Last month, while returning from a Black History event in Jamaica, Mohammed Ali Junior and his mother, Khalilah Camacho Ali, were stopped by US Homeland Security Immigration and Customs Enforcement (ICE) officials at Fort Lauderdale-Hollywood International Airport in Florida and questioned about their religion.

Unlike Mohammed Ali, who converted to Islam, Ms Ali, formerly Belinda Boyd, was born and raised a Muslim by her parents in Chicago. Her son, Mohammed Ali Jr, born in Philadelphia, was also raised as a Muslim. Both of them believe that their religious beliefs and identity should not be a cause for scrutiny by US government officials, who detained them in separate rooms for two hours.

Ali Jr told CNN that an ICE officer asked him about his name and then “He said, ‘OK, now, what is your religion?’ And I said ‘Muslim, I’m a Muslim.’ And I thought to myself that is kind of odd. He asked about my religion and I’m travelling back into the country I came from!”

The Ali family believe the incident stemmed from US President Donald Trump’s executive order that put a temporary travel ban on foreign nationals entering the country from seven Muslim-majority countries in the Middle East. That travel ban, which was in force when the Alis were travelling on 7 February, was subsequently ruled to be unconstitutional by a federal appeals court. However, this Monday President Trump signed an executive order introducing a new travel ban that bans foreign nationals from six Muslim-majority countries and incorporates amendments designed to rule out any legal challenges to the new order. 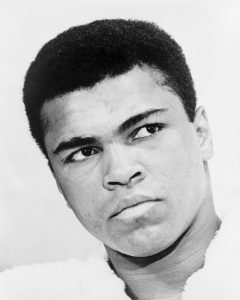 Following that development, the Alis have launched a ‘Step into the Ring’ campaign aimed at providing a focus for opposition to the new travel ban.

Larry Holmes, a former world heavyweight champion, is one of only five boxers to have beaten Mohammad Ali in the ring.

Roberto Duran, a Panamanian Catholic, is considered by aficionados to be the greatest boxer of all time, having won world titles in four different weight categories – lightweight, welterweight, light middleweight and middleweight.

On Twitter, the Step into the Ring campaign is using the hashtag #AlivsTrump.

How embarrassing this will prove for President Trump remains to be seen. When Ali died last June of Parkinson’s Disease, Mr Trump described him as “a truly great champion” and the President made a point of visiting an Ali exhibit during a visit to the National Museum of African-American History and Culture in Washington recently.

Born Cassius Clay in 1942, the boxer won an Olympic gold medal as an amateur in 1960 and then won the professional heavyweight champion title in 1964, the same year that he converted to Islam and changed his name to Mohammed Ali.

The name change coincided with his growing involvement in the Black civil rights movement, with the boxer describing his previous moniker as his ‘slave name’. When he refused as a conscientious objector to be drafted to fight in the Vietnam War, he was sentenced to a five-year prison sentence, but never served any time behind bars. Stripped of his heavyweight title, he was banned from professional boxing for four years until the sentence was overturned in the US Supreme Court in 1971. He then went on to win the professional heavyweight title twice more in 1974 and 1978.

He fought one match in Ireland at Croke Park in 1972, but at that time he did not know that he had some Irish roots, with one of his great-grandfathers coming from Ennis.