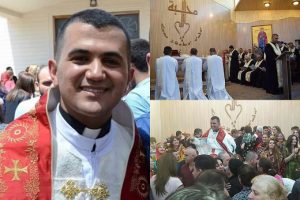 Fr Roni Salim Momika, one of three priests ordained in an Erbil refugee camp last Friday, said the event has turned the dreary mood of displaced Christians into one of joy, which he hopes will give them the strength to stay in their homeland.

“My feeling is happy, happy!” Fr Momika told CNA after his ordination, adding that he feels “something inside” that makes him deeply joyful.

He was ordained a priest of the Syriac-Catholic Church alongside his friends and fellow deacons Emad and Petros in the large, prefabricated church inside Erbil’s Aishty 2 camp for the displaced, which is home to some 5,500 people forced to flee their homes due to ISIS.

The ordination, he said, “will give hope to (the people)” in the camp, mostly Syriac Catholics from Qaraqosh, who for two years have been forced to live as refugees.

“We left Qaraqosh during this time two years ago,” he said, explaining that it’s been “a time of challenge” and “a time of sadness” for the Christians.

However, while the anniversary could serve as a reminder of the bleak and uncertain reality for Christians in Iraq, the sight of three young men being ordained to the priesthood has instead made it “a happy time, a hopeful time, and a good time,” Fr Momika said.

“Before it was a bad day because we became refuges and ISIS entered to Qaraqosh, but now this day became a good day because it’s our ordination and we give hope to our people,” including the hope “to stay here,” he said.

Fr Momika, Emad, Petros and another seminarian named Paul were all forced to flee Qaraqosh when ISIS attacked in 2014.

Before being forced to leave, Momika and his sister were among the victims wounded in a 2010 bombing of buses transporting mainly Christian college students from the Plains of Nineveh to the University of Mosul, where they were enrolled in classes.

Since the Qaraqosh seminary was closed following the 2014 attack, the then-seminarians were sent to finish their studies at the Al-Sharfa Seminary in Harissa, Lebanon.

After completing their studies in Lebanon, they returned to Iraq for their deaconate ordination, which took place March 19.

Since then, Paul decided to serve in Baghdad, and was ordained there roughly 20 days ago, while Fr Momika and the others were ordained in Erbil.

Archbishop Yohanno Petros Moshe, Syriac Catholic Archbishop of Mosul, Kirkuk and Kurdistan, the priests’ bishop, was the one who celebrated their ordination Mass in the Aishty camp.

Fr Momika, whose family fled to Erbil after leaving Qaraqosh, said that while the church only has a capacity of about 800 people, about 1,500 showed up for the ordination.

Several of his family members were able to come for the ordination, including his father, sister and many others who travelled from Baghdad, Aqrah and other cities to be there.

Until now Fr Momika has worked with the youth and led the women’s groups inside Erbil’s refugee camps. The priest said that for now he will remain in Erbil and continue to serve in that capacity, but it’s up to Archbishop Moshe to decide “if I will stay here or not” in the long run.

As a newly ordained priest surrounded by violent persecution, Fr Momika said that he wants “to stand with the refugees” despite the “the danger (in their) lives.”

He said he wants to give the Christians “power, hope, and courage to continue their lives and stay with the poor people” and those who are suffering, adding that for him, the essence of his role and vocation is “to give Christ to the people.”