Home > Featured > Three men ordained to the priesthood over the weekend

Three men ordained to the priesthood over the weekend 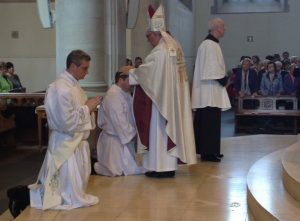 Three men were ordained to the priesthood in Ireland this weekend, two for the diocesan priesthood and one for the Pallottine order.

Fr Brendan’s first assignment will be in Detroit, Michigan, in the US.

In his homily, Bishop Kelly told Fr Brendan and the assembled congregation of family and friends that we are living in a world that doesn’t always understand the value of obedience.

“We follow Jesus, whose path was one of ‘humbling himself and becoming obedient to death, even death on a cross’.”

“The disciple of Jesus is a person who longs to pray, a person who sees that somewhere somehow prayer is the foundation of all that Jesus was, all he did, all he spoke.”

Describing prayer as the wellspring of all Christian life, the Bishop continued, “This was the example Jesus showed, and those who wish to exercise the apostolate of Jesus Christ, particularly as priests, cannot do so unless their every day, their whole being and every word they utter is founded on prayer.”

Bishop Kelly also stressed that the word priest means ‘mediator’… one who speaks on behalf of others, “who in our case as ministerial priests speak to God for our people, our world, ourselves”. 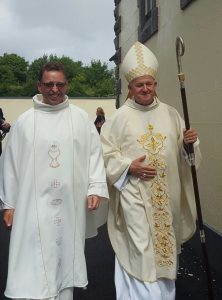 “Our example is crucial, as was Jesus’ example for his disciples, so that they in their turn might embrace that common priestly baptismal call to be men and women of prayer,” the Bishop of Achonry said.

The two new priests for Clogher diocese have yet to be given their first appointment.

Fr Duffy is from Ballybay. He completed his formation at the Pontifical Irish College in Rome. While there, he also studied philosophy and theology at the University of St Thomas Aquinas (the Angelicum).

Fr Malcolmson is from Aghabog parish. He undertook his formation at St Patrick’s College, Maynooth, where he also studied philosophy and theology.

Sunday’s ordinations bring to four the number of new priests ordained for Clogher in the past three years.

There are currently two other seminarians preparing for priesthood in the diocese of Clogher.

The newly ordained priests will celebrate their first Masses in Ballybay and Aghabog churches this evening at 7pm.