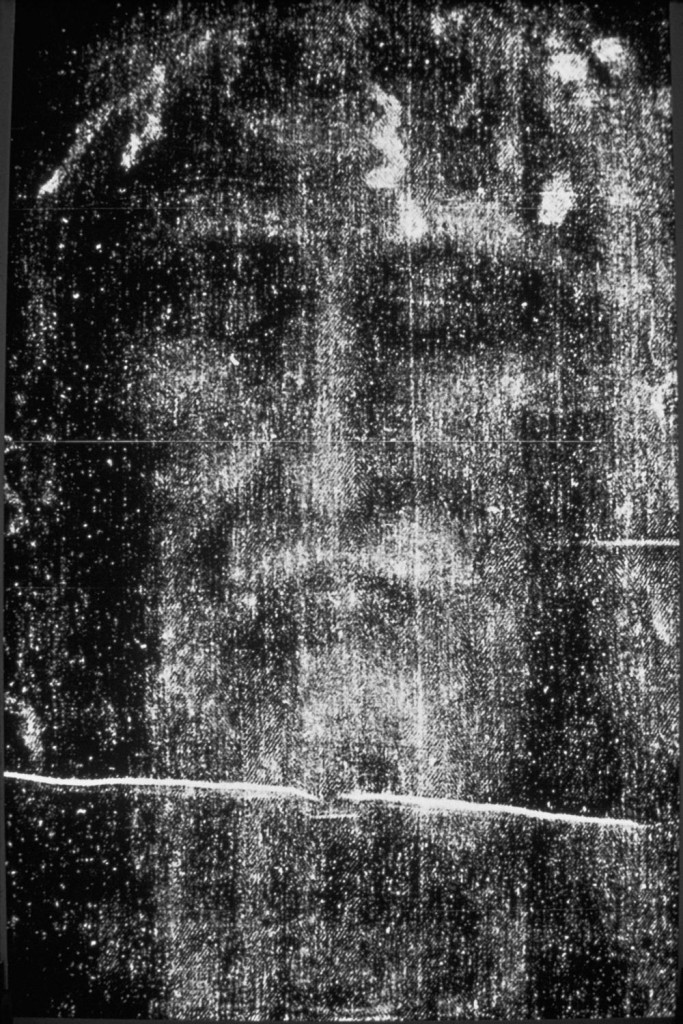 A photographic life-size exhibition of the Shroud of Turin has attracted thousands of visitors at the the Pro Cathedral in Dublin.

The exhibition, which ends on St Patrick’s Day, has seen a steady flow of visitors from 9am each morning until the cathedral closes at night.

“For me what comes out of the exhibition is the immense love of God and his son who gave his life for us,” Fr Damian O’Reilly, Administrator at the Cathedral, told CatholicIreland.net.

“It shows the reality of the suffering he endured for us. For that reason the exhibition is there at the side of the church and we can look at it, as part of our Lenten journey.”

This exhibition, which features life-sized photographic replicas of the Shroud of Turin, was created in 2008, using the 1978 photographs of Barrie Schwortz.

It aims to use the replica of the Shroud as a visual aid to tell the story of the crucifixion of Jesus Christ and to examine the mystery of the cloth.

The presentation follows  the journey of Jesus from his trial through the events of Good Friday to the empty tomb, citing passages from the four Gospels.

It tries to demonstrate what the flogging, the whip, the piercings, the nails and spear were really like, using the Shroud as a teaching aid.

The exhibition has already visited a number of cathedrals in the United Kingdom and Cardinal Vincent Nichols, leader of the Catholic Church in the England and Wales, was one of those to view it.

Afterwards he commented, “It helps us to enter more deeply into the sufferings of our Lord.”

In March last year, in one of the first acts of his pontificate, Pope Francis prayed before the Shroud of Turin, just hours before the first televised  broadcast of the Shroud in four decades.

The Pope avoided any pronouncement on the authenticity of the cloth, but said it invited viewers to contemplate the suffering of Jesus of Nazareth, and the face “conveys great peace”. 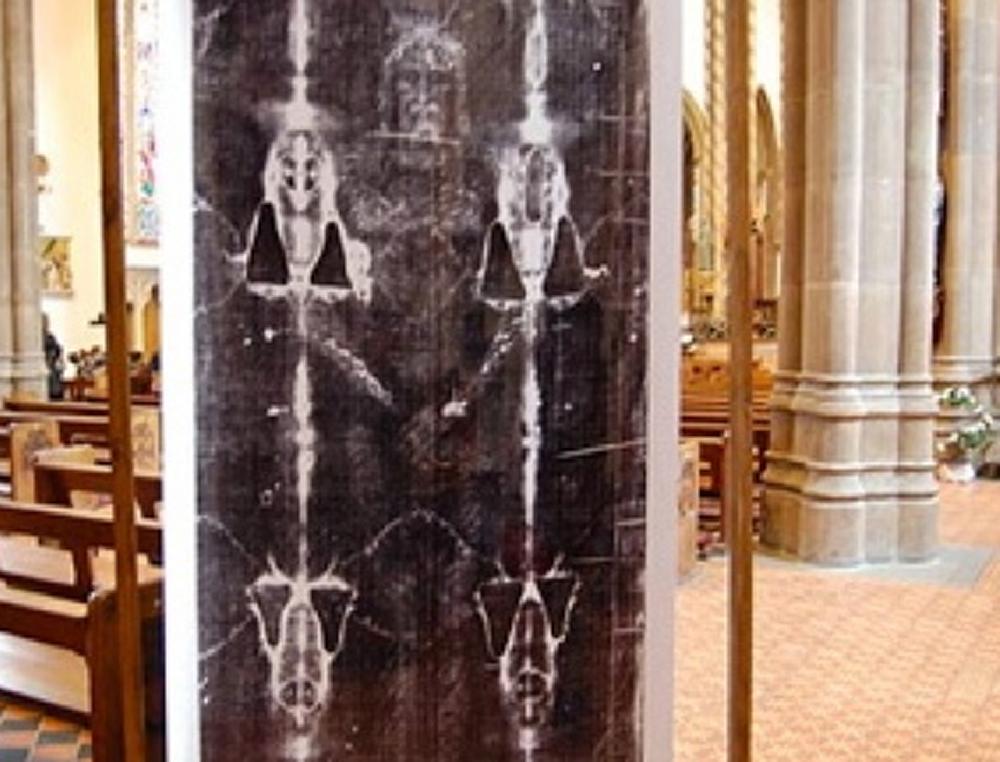 “How is it that the faithful, like you, pause before this icon of a man scourged and crucified?” he wrote in a message.

“It is because the Man of the Shroud invites us to contemplate Jesus of Nazareth. This image, impressed upon the cloth, speaks to our heart and moves us to climb the hill of Calvary, to look upon the wood of the Cross, and to immerse ourselves in the eloquent silence of love.”

The exhibition on display in the Pro Cathedral belongs to an English woman, Pam Moon, one of only four people in the world to own a replica of the Shroud.

Ms Moon is passionate about the exhibition, and devotes herself to promoting it.

She will personally oversee the clearing of the display, and its transport to Cork where the exhibition will run from the 20 – 30 March 2014 at St Mary and St Anne (North Cathedral) in Cork.

The original Turin Shroud is kept in the royal chapel of the Cathedral of Saint John the Baptist in Turin, Italy.

The striking image which captured the world’s imagination was first observed on the evening of 28 May 1898, when amateur photographer Secondo Pia, was allowed to photograph it and discovered the image as a negative.

The Catholic Church has never formally endorsed or rejected the shroud, but in 1958 Pope Pius XII approved of the image in association with the Roman Catholic devotion to the Holy Face of Jesus.

Last year Giulio Fanti, a professor of mechanical and thermal measurement at the University of Padua, published a book entitled Il Mistero della Sindone (The Mystery of the Shroud), documenting the work of his research team which dated tiny fibres extracted from the shroud during earlier carbon-14 dating tests conducted in 1988. 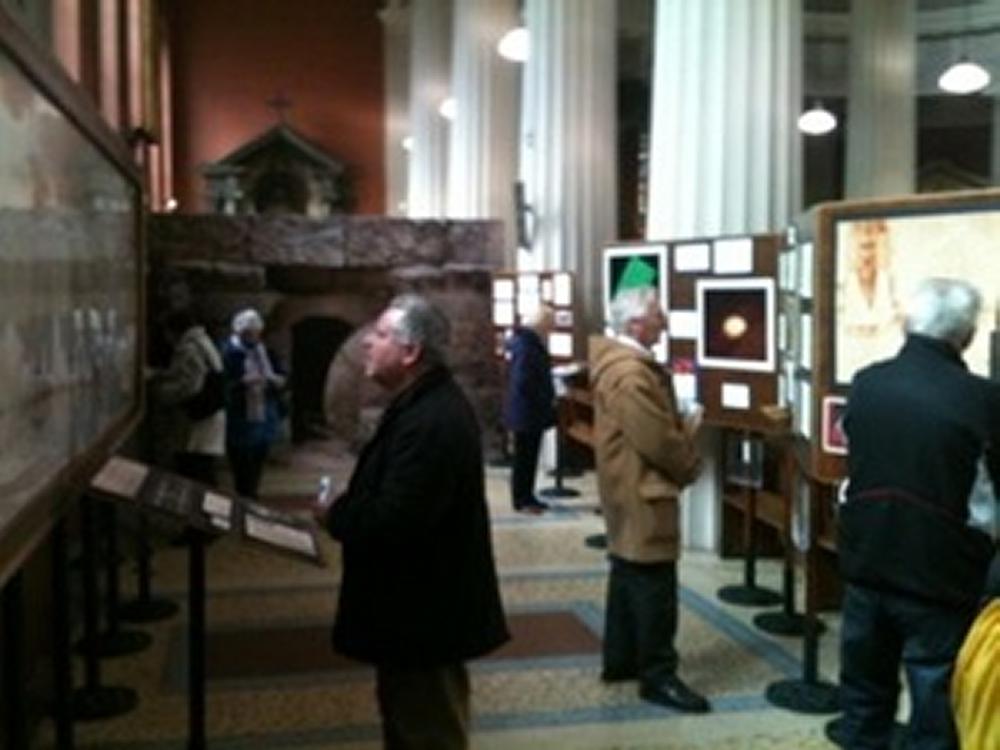 Exhibition on Shroud of Turin at Pro Cathedral Dublin.

The University of Padua research team found the fibres dated  to between 300 BC and 400 AD.

“For me the [Shroud] comes from God because there are hundreds of clues in favour of its authenticity,” wrote Prof Fanti, but he added there were “no sure proofs.”

Much of the controversy about the Shroud centres around carbon-14 dating tests from 1988 that concluded the piece of linen was a medieval forgery.

However, others argue the results may have been contaminated by fibres used to repair the cloth during the Middle Ages, and by bacterial spores.