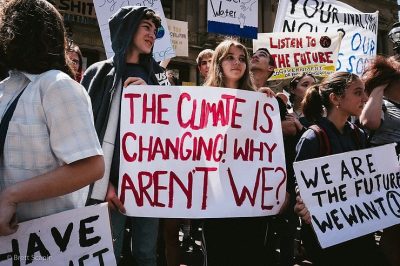 This Friday, thousands of young people in Ireland will take part in the International Climate Strike – a worldwide day of action by students calling for climate justice.

The protest is aimed at pressuring governments to act to save the planet before it is too late.

The climate protest in Ireland, which has been taking place outside the Dáil every Friday since last December, is a response to Swedish student Greta Thunberg’s #FridaysForFuture movement.

The 16-year-old staged the very first school strike for climate outside the Swedish parliament building in August 2018.

According to Dublin parish pastoral worker Jane Mellett, who last October became a climate pilgrim when she undertook a 1,000km walking pilgrimage to the COP24 talks in Poland, the youthful demonstrations are “the most hope-filled movement that I have ever experienced”.

In recent weeks, that number has risen to over 200. Ms Mellett herself has been a weekly participant.

Explaining what the protest entails, she wrote on her blog: “Each week students teach us a new chant and new people join us with their colourful banners and epic slogans. Climate strikes have sprung up in Maynooth, Cork, Kilkenny, Tralee and Galway over the past few months.

“Saoi has been striking outside Cork City Hall for the past nine weeks with a sign that has become famous: ‘The emperor has no clothes’, a great line from the Hans Christian Anderson story, now used to criticise the majority who don’t speak up for fear of looking stupid. Only the young boy in the story would shout the truth.”

This Friday is a major day of demonstration. There are marches planned in cities all over the world. The protests are being led by school students calling for #ClimateActionNow to meet the temperature goals of the 2015 Paris Agreement.

Many others, young and old, intend coming out in solidarity with the students.

In Jane Mellett’s opinion, politicians worldwide need to open their ears to the students because the majority of these young people will be of voting age in two to three years’ time.

“There is no political will to solve the climate crisis because it is not an issue for the general public. Or if it is an issue for people, they are not expressing that concern to politicians loudly enough.”

But she stresses that there is “clearly an awakening” as the climate strikes demonstrate.

The strike will take place at 1pm on Friday 15th March in Ireland.

Students, and those who support their call for #ClimateActionNow, are being encouraged to gather wherever they can, take a photograph and share in on social media with the hashtags #SchoolStrike4Climate, #FridaysForFuture and #ClimateStrike.

In many cases something will be organised in schools or at school gates. Where possible people will gather outside town halls.

There are marches and rallies planned in Dublin and Cork, with many other rallies around the country.

There is also a teacher-supported, student-driven schools climate action network.