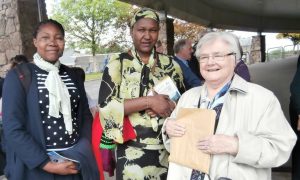 Up to two thousand pilgrims from across Ireland gathered in Knock last weekend for the 36th annual OLA-SMA pilgrimage to the national shrine in Co Mayo.

In his homily, recently returned Irish missionary, Fr Tim Cullinane, who spent 52 years in Africa, urged pilgrims to ‘Welcome the Stranger’ as he highlighted the plight of the men, women and children who attempt to reach Europe in search of a better life.

He told missionaries from the two orders, the Missionary Sisters of Our Lady of Apostles and the Society of African Missions, as well as their co-workers and family members, that though it may seem incredible to those who are suffering the after effects of the economic crash – especially those who are unemployed or burdened by mortgages or have been forced out of their homes by banks and vulture funds and government inaction – Ireland ranks 10th of 142 countries in terms of wealth according to the 2015 Legatum prosperity index. 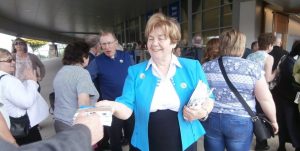 He reminded the two missionary congregations that their mission is to bring the Good News of Jesus Christ to the peoples of Africa.

Annually this pilgrimage brings them all together with their supporters from Ireland and beyond to mark and celebrate that.

Fr Cullinane highlighted how in the media, much of the news from Africa is bad news: wars, poverty, famine, diseases like Ebola, corruption, undemocratic governments, Boko Haram kidnapping young girls.

“But this is only one side of the story,” he stressed.

After celebrating a Mass in Africa for Fr McCabe who had passed away in Ireland, a man came up to him to tell him how grateful he and his family were to Fr McCabe.

“The family was very poor and in a country where there is no free education like we have here, they could not pay to get their children into school. Fr McCabe helped them and now he was a lawyer, his brother an engineer and his sister a teacher.” 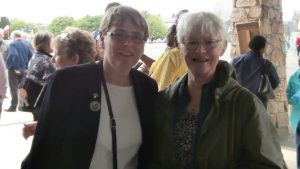 “This reminds me of something I once read, ‘One hundred years from now, it will not matter what your bank account was, the sort of house you lived in or the kind of car you drove but the world will be a different place, because you were important in the life of a child’.”

He said Pope Francis had been speaking out powerfully on the plight of refugees and asylum-seekers, reminding people that “migrants are our brothers and sisters in search of a better life, far away from poverty, hunger and exploitation, much like our forefathers at the time of the famine, fleeing to the United States and Canada, many of them dying on the way from disease and malnutrition”.

“Today, if we have eyes to see, Pope Francis says we can see the face of Jesus in the migrant, in the refugee seeking protection from persecution, war and famine, in the men, women and children who are victims of trafficking, in the asylum seekers imprisoned for fleeing without documents.”

“We should not see them as a threat to our security and our standard of living and, in our minds, put up wire fences against them as some European countries are actually doing.”

In this Jubilee Year of Mercy, with Mary the Mother of Mercy, let us open our hearts, like Pope Francis, to the refugee and the migrant, he implored.