Thousands to attend festival of faith in Holycross Abbey 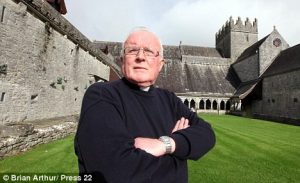 Thousands of people from all over the country will attend a nine-day festival of faith at Holycross Abbey in Co Tipperary later this week.

This year’s Novena runs from Wednesday 8 September to Friday 16 September.

Visitors to this year’s Solemn Novena at the 800-year-old Cistercian Abbey in Thurles Co Tipperary, will have an opportunity to be blessed with a relic believed to be of the True Cross, which is presently situated in the ancient abbey’s side altar.

Helpers in the form of stewards, caterers, musicians, singers, Eucharistic ministers, Gardaí, clergy etc have been drafted in to assist with this year’s enormous event, which will see over 60,000 people pass down the abbey’s aisles over the coming seven days.

Speaking this week about the Novena, Holycross parish priest Fr Tom Breen said, “After some 36 years of this annual novena, people are still bringing their own ‘personal crosses’ to Holycross Abbey.”

“Christians currently burdened in various ways through personal health issues, finance issues, other personal problems including difficulties in personal relationships etc are all still coming to the novena, where they listen and they gain the necessary strength to continue their personal battles, while often realising, possibly for the first time, that there are many people who are much worse off than they themselves.”

Speaking about why people attend the novena Fr Breen said, “We are aware of people who suffer in various ways in relation to health, finance, personal problems, relationships, but when they come to the Novena they listen and realise that there are worse off people than themselves.”

“The abbey holds 1,000 people and we have a marquee which holds another 1,000 people who don’t mind making the sacrifice of coming here every morning from 7am to attend one of the five daily sessions.”