Call for solidarity with persecuted Christians 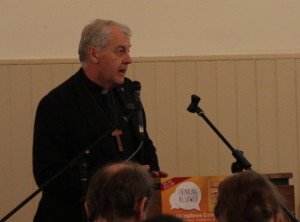 The Church of Ireland Archbishop of Dublin & Glendalough has urged people to lend solidarity to the Christians of the Middle and Near East who “endure and sustain unspeakable human suffering and degradation, intimidation and displacement”.

In his address to the ‘Thinking Allowed’ Ecumenical Bible Week event in All Hallows College on Thursday evening, Archbishop Michael Jackson said across the heartlands of Christianity, followers of Jesus Christ “carry the cross of Jesus Christ in tangible and tactile ways that are unimaginable to us”.

Addressing the theme, ‘What is the Spirit saying to the Churches?’ the Anglican Primate of Ireland urged Christians here to connect their witness with this witness of Christian suffering.

“On their witness in life and martyrdom in death we are reliant for the faith that is ours to enjoy and in which we delight,” he told a packed Woodlock Hall where there was standing room only. 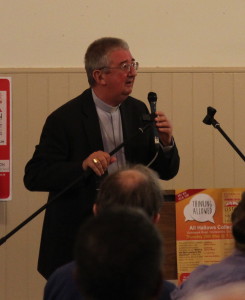 Dr Jackson continued, “As we pray for the peace of Jerusalem, we pray for the life of all peoples of the Middle East and the Near East, foe and friend alike. We pray for the fruit of the Spirit: love, joy, peace (Galatians 5.22).”

He urged his listeners to listen to their fellow Christians in the Middle East and to develop with them “a new Liberation Theology of solidarity based on obedience, cross-carrying and witness that is nothing like anything you remember – precisely because you have forgotten it has anything at all to do with you”.

Elsewhere in his address, Archbishop Jackson said the Spirit is saying to the Churches, “Please do not disregard Apocalypse; please do not confine your understanding of it to late night television and, as members of a sophisticated but self-indulgent society, do not cheapen the reality by laughing at the imagery.”

Urging them to make the distinction between these perceptions of Apocalypse, he said it comes from a noble and ancient tradition of response not least to the exotic and the inaccessible character of God.

“It was hammered out in a situation of intense persecution. The Lord’s Prayer is apocalyptic as are Gospels and St Paul,” he explained and appealed to people to say the Lord’s Prayer regularly together.

“It has become something which you have long ago begun to associate with children and you fail to let it grow with you and to let yourselves grow into it.” 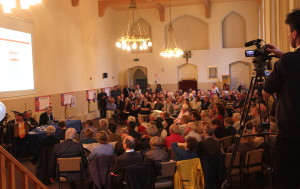 “If we have no contemporary understanding of who and what heaven is that is acceptable to our modern sophistication and loneliness, we need to start developing one and to make this fulcrum the focus and scaffolding of our mission,” he sugested.

The other speakers on the panel for ‘Thinking Allowed’, which was attended by over 200 people, were Archbishop Diarmuid Martin of Dublin, Fr Calin Florea, a Romanian Orthodox priest, Pastor Sean Mullarkey, AGI national leader and pastor of St Mark’s Church in Dublin and Pastor Tunde Adebayo-Oke of the Redeemed Christian Church of God.

The evening was presided over by Philip McKinley, Ecumenical Officer of the Irish Inter-Church Committee.