Theologian hails Irish ecclesiology for a Church in crisis 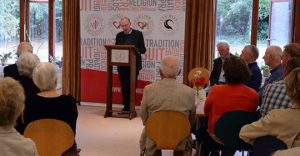 A new book by the Jesuit theologian Fr Gerry O’Hanlon provides a vision for a new synodal and collegial church and is “a gift to the Church in Ireland at this soul-searching moment in history”, Mgr Dermot Lane said as he launched it.

The retired president of Mater Dei Institute of Education has written the Foreword to The Quiet Revolution, which is published by Messenger Publications.

In his address at Avila Carmelite Spirituality Centre last week, Dr Lane said the author offers an Irish theology for a Church in crisis.

He commended Fr O’Hanlon for his forensic analysis of the crisis gripping the Church at this time; his clear exposition of the prophetic vision of Pope Francis; his careful theological mapping of a new way forward and for his articulation, step by step, of what a synodal Church would look like.

In the book, the Jesuit distinguishes between two types of reform. One type relates to controversial subjects such as the possibility of Communion for the divorced and remarried; the tackling of child sexual abuse throughout the universal Church; the review of Vatican finances; the appointment of bishops; and the question of celibacy.

“These are important subjects, but they are not at the core of Francis’s quiet revolution,” Mgr Lane told those who attended the Jesuit’s book launch. He explained that there is “a deeper reform at stake, a reform that forefronts the mission of Christ in the world, with everything else serving this mission.”

A synodal Church, he said, is about fostering a spirit of collegiality at all levels; promoting consultation and embracing the voices of the faithful; taking seriously the priesthood of the baptised; listening to the sense of the faithful among the people of God.

“In effect, a synodal Church seeks to invert the pyramid, to create a sense of all being on the road together,” Mgr Lane explained.

Referring to Chapter Four of The Quiet Revolution, he said Fr O’Hanlon outlines what is required of the Church for the 21st century.

At the centre of this vision is the teaching of Vatican II, which sees the Church primarily as the People of God, made up of the baptised, who are endowed with an important sense of the faith.

This synodal church, Fr Lane highlighted, requires the involvement of all. “And here, Francis invokes an ancient principle: That which touches all should be dealt with by all.”

He said Pope Francis distinguishes three different layers of synodality within the Church: the first of these is synodality at the local level, involving parishes and dioceses in processes of consultation, listening and learning.

Mgr Lane, who is a retired parish priest of Balally in Dublin, highlighted that Chapter 7 of The Quiet Revolution addresses the “thorny question” of ‘Governance in a Synodal Church’.

“Here, Fr Gerry asks a number of key questions such as is it possible to promote a dynamic unity within the Church without lapsing into a deadening form of uniformity?”

In his launch address, Dr Lane said the chapter asked if it possible to envisage a form of governance that reflects a Trinitarian model of God, that is, a view of governance that holds on to an underlying unity while respecting the kind of diversity that is at the heart of our triune God.

“To answer these questions, we must remember that it is Christ, not the Pope, or the bishops, who is the head of the Church. Further, new governance in the Church will require more collegial structures in Rome and more synodal processes at all other levels of life in the Church from parish to diocese to the universal Church.”

Referring to Chapter 8, which is entitled ‘The Role of the Laity, including Women, in Authority’, he noted that one of the great paradoxes of the 20th century is that Vatican II sought to open up the way for the participation of lay people in the life of the Church and, on the other hand, the code of Canon Law came along in 1983 to exclude lay people from participating in decision-making processes.

The only way around this contradiction is to recover and develop the Theology of Baptism as outlined at Vatican II.

He said that through Baptism the Council taught that lay people participate in the threefold office of Christ as priest, prophet and king (Lumen Gentium, 12).

He said he was reminded of the observation by the Orthodox theologian John Zizioulas, who points out there is no such thing as a non-ordained Christian.

“The Church is called to mirror the love of God in the world, and to make present in the world the new, inclusive Reign of God established by Christ. However, in its practice, the Church has become what Gerry calls ‘an anti-sign instead of a sacrament’ [125] when it comes to authority and women,” Fr Lane said.

“This failure to follow through on the teaching of Vatican II on the priesthood of the laity and their participation in decision making has had very negative consequences in the life of the Irish Church, especially in the areas of child sexual abuse, the mismanagement of this crisis, and the creation of a dysfunctional culture of clericalism,” he said.