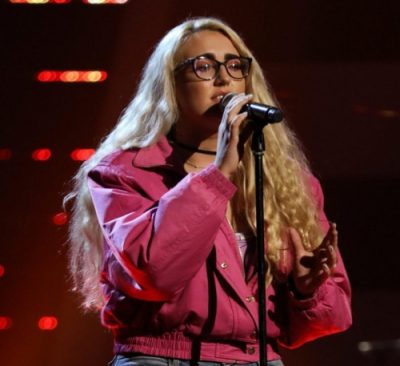 The organisers of the Emmanuel Concerts, which begin in Dublin on Monday, have said they are delighted to be without one of their chosen soloists.

Eva Campbell from Skerries Community College was selected for a solo performance in the Helix this week, but she will miss out as she has made it through of the next round of The Voice UK.

Eva made it through the blind audition rounds of the TV show and her friends in Emmanuel are hoping she will make it even further in the famous competition, under the guidance of mentor Olly Murs.

From tomorrow evening in the Helix, her fellow students from Skerries Community College will join 2,500 other teenagers taking part in the concert series held over four nights, featuring the voices of secondary school pupils from 66 schools in the Archdiocese of Dublin.

“The concert series is unique in the Irish Church – with students between the ages of 12 and 17 singing music live in front of a large audience,” said a spokesperson for the Archdiocese of Dublin.

Each of the evening performances is almost entirely student-led, with soloists, musicians and MCs all coming from among the student body.

As in previous years, boys and girls from the Holy Family School for the Deaf in Cabra will together sign and participate in each of the four concerts. Since first taking part in the Emmanuel concerts, the deaf choir has gone on to perform in Áras an Uachtaráin and the Late Late Toy Show.

Before getting on stage each day the students participate in faith-based workshops, reflections rehearse hymns and play music. The live concerts begin at 7.30pm each evening where parents, family members, teachers and the public get to enjoy the fruits of preparations. Tickets cost €12.50.

After the Emmanuel Concert, which is an initiative of the archdiocese, participating students are encouraged to take the music and prayers they learn during the Emmanuel workshops and concerts, and use or adapt them in their own prayer services and liturgies in their school communities throughout the year.

Eva Campell, 17, is a fifth-year student at Skerries Community College. She won “Skerries Got Talent” when she was just 10 years old.

Speaking to The Herald about her The Voice audition, where she sang “Teardrop” by Massive Attack, she said: “I was really, really praying for one of them to turn.”

Her performance impressed Olly Murs, who will act as her mentor going into the next round. An estimated five million people regularly watch the popular ITV programme.