Home > News > “The prayers of the sick are invaluable” – Cardinal Brady

“The prayers of the sick are invaluable” – Cardinal Brady 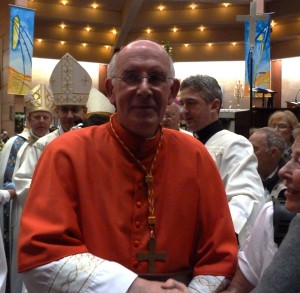 The Primate of All Ireland, Cardinal Sean Brady, has warned that the act of consecrating Ireland to the Immaculate Heart of Mary, which took place in Knock on Thursday, is “not a magic formula.”

Speaking after the ceremony to CatholicIreland.net, the Cardinal said the consecration meant that all the faithful gathered for the ceremony had entrusted their lives to Christ through Mary.

“It is about trying to live out our baptismal promises and growing in our communion in Christ and about becoming Mary’s children and being more faithful,” he explained.

Referring to the “wonderful turnout” despite the inclement weather, Cardinal Brady said, “I certainly am glad that the Irish people in this Year of Faith got the opportunity to express publicly their love of Mary and entrust themselves to her intercession.” 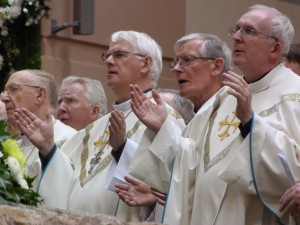 Of the many sick and their carers gathered on the Feast of the Assumption for the anointing of the sick, Cardinal Brady said Knock was “synonymous with the sick.”

“The sick are the royalty of Knock – you can see how they get first place, that is only fair because Christ in his ministry devoted so much time to the sick.”

The Primate added, “We are all in need of healing – healing of the ruptures of communion with Christ and with each other. That is why more and more people should come to knock to be healed.”

He also appealed to people to say the prayer of consecration and entrustment in their homes and especially with the sick. “I think the prayers of the sick are invaluable – in the sight of God they are all powerful,” he said. 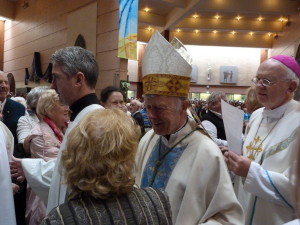 The Cardinal’s Coadjutor, Archbishop Eamon Martin, told CatholicIreland.net that one of the things that had most impressed him about the day was the “huge number of people coming from all parts of the country.”

He revealed that the 15,000 pilgrims who turned out had “surpassed our expectations.”  He said it was an indication of the importance of the shrine of Our Lady at Knock.

“Two weeks ago Pope Francis visited this shrine of Our Lady in Brazil. We have this place and we don’t realise the treasure that we have here in Knock. It is a very special place of prayer and reflection. The fact that people of all faiths and none come here to be lifted up in their spirit – I think that is something really great about Knock.”

Asked about his recent references to the drift away from the faith and the fact that Knock still draws crowds of 1.6 million annually, Archbishop Martin said, “I think people still have a deep need and a deep hunger for purpose and meaning and I think it is a hunger for God.”

He admitted that some might have been “a little bit put off by all that has been going on in the Church in recent decades, but without being too proud, I think if we open people up to friendship with Jesus very gently, Jesus will do the rest.”