The possibilities for rural Ireland are boundless – Fr Eamonn Fitzgibbon 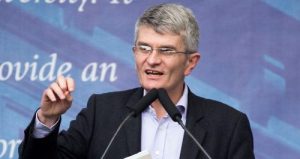 The head of pastoral studies at Mary Immaculate College in Limerick has said that the possibilities for rural areas are boundless. Fr Eamonn Fitzgibbon was speaking to the local media after the recent ‘Building Rural Communities – Lessons from the World of Sport’ conference, held at St Patrick’s College in Thurles recently.

The conference featured contributions on rural Ireland from Tipperary Senior hurling manager Michael Ryan, former Ireland and Munster rugby prop forward John Hayes, businessman and entrepreneur Padraig Giblin and the CEO of the National Ploughing Championships Anna May McHugh. Former Kerry footballer and Chairman of the Commission for the Economic Development of Rural Areas (CEDRA) Pat Spillane was unavoidably absent on the night due to illness.

Speaking about the conference to the Tipperary Star newspaper, Fr Eamonn Fitzgibbon said that “The size of the attendance proved that people are concerned about rural Ireland and want to work at rejuvenating it and making it as dynamic and sustainable as they know it can be. We had people from Waterford, Kerry, the west coast of Clare, Galway, even Co. Louth. The one thing they all came with was a desire to hear from rural leaders about the type of thinking and approach required to make a difference in challenged communities. What does that say? It says that people care and that’s a brilliant start.”

Commenting on the speakers, he said: “We heard stories from people like Padraig Giblin as to what has been built in Scariff in Co. Clare, from Mick Ryan as to what has been achieved in Upperchurch. Anna May McHugh left us all enthralled regarding the ultimate rural gathering, the Ploughing Championships and the magnitude of what has been achieved there. Then John Hayes told us about his special part of the world, Cappamore, the ‘show’ there and its impact as well as the success of his first rugby club, Bruff, in another rural area.”

He concluded: “the enthusiasm and energy in the room was infectious and the big message that was taken away from it was the need to do things for ourselves and that it starts by bringing people, young and old, generational parishioners and newcomers, together. What starts with a casual chat in a meeting room or out on a walk with community members can result in something very special.”