Close to 20 million hectares of land have been restored back to health by the Great Green Wall (GGW) of trees in Africa.

Irish missionaries and development agencies have been involved, and there has been funding from the Irish Government and people who have donated to the project. It involves planting 8000 km of trees across 20 countries in Africa to combat desertification, and is under leadership of the African Union Commission and Pan-African Agency of the GGW and backed by United Nations Convention to Combat Desertification (UNCCD).

These latest statistics were released in the Great Green Wall Implementation Status and Way Ahead to 2030 report launched virtually on 7 September 2020.

“The achievements reported here are from the Sahel where soils are not very rich. This suggests restoring land has the potential to transform lives worldwide and to mitigate the global environmental threats we face today,” said Ibrahim Thiaw, Executive Secretary, UNCCD.

The report states that close to 20 million hectares of land was restored, over 350,000 jobs were created and around USD 90 million in revenue was generated from 2007 to 2018 through GGW activities. The restored area also sequesters CO2.

The GGW initiative was conceived in 2007 in response to widespread land degradation and extreme poverty linked to recurrent and severe droughts in the Sahel. Sahel is located on the southern edge of the Sahara Desert, stretching from the Atlantic Coast of West Africa to the Red Sea in the East. The response was the GGW to restore degraded lands across a 15 km wide and nearly 8,000 km long area covering around 153 million hectares of the Sahel. The GGW is already helping households to support more livestock, grow more food and have better access to water. It is also creating better environmental conditions globally. Once complete, the Wall will be the largest living structure on the planet.

“The GGW is yielding immediate benefits for the local communities and long-term ecosystem benefits at the international level. It shows that when countries dare to dream, work together and make the right choices, we can prosper and live in harmony with nature. And where innovative ideas emerge, positive, dramatic change that benefits both the local and international communities will happen,” said Ibrahim Thiaw, UNCCD. 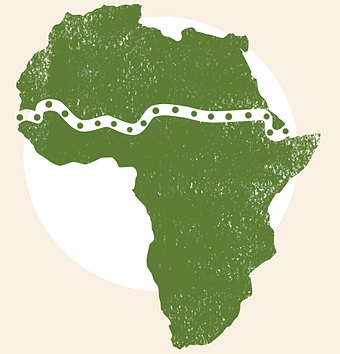 The Great Green Wall – 8000km of trees from Senegal to Djibouti

The Society of African Missions (SMA) with partner the Tree Council of Ireland, has been raising funds and has the Laudato Tree project which involves planting trees both in Africa and in Ireland.

At a symbolic planting of 14 trees for the launch of the project in Roscommon in 2018, Denis Naughton TD and then the Minister for Communications, Climate Action and the Environment, said that the SMA in launching the Laudato Tree project will increase Irish biodiversity and contribute to Irish climate mitigation efforts, while also raising Irish awareness of and support for the wider GGW initiative.

“The awe-inspiring concept of the Great Green Wall, a band of 8,000km of green and productive landscapes, which will halt the southward spread of the Sahara Desert, is one I have been keen to support,” he said.

Ireland has been described as the most treeless country in Europe with tree coverage of 11 per cent compared to the average throughout the European Union of 37 per cent.

The Laudato Tree Project accepts donations of all sizes. One initiative involves donating €60, of which €25 is invested in Ireland to plant trees, and maintain them for ten years under the care of the Tree Council of Ireland. The remaining €35 goes towards restoring degraded lands along the Sahel, training GGW guardian communities, increasing food security, creating green jobs, offering hope to Africa’s youth and reducing the need for migration or the dangers of radicalization. Funds donated for GGW are passed on by the SMA to UNCCD and through them to a GGW project based in Paga, northern Ghana.