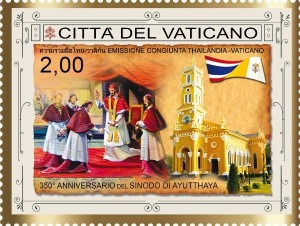 The Catholic bishops of Thailand have declared a Holy Year commemorating the 350th anniversary of the first Synod of Ayutthaya in 1664.

They also hope the Holy Year will reinvigorate enthusiasm for the New Evangelisation in 2015 when they will hold the first Plenary Council of the Catholic Church in Thailand.

The theme of the Council is ‘The Disciples of Christ Live the New Evangelisation’ and it will take place from 20-25 April 2015.

Monsignor Andrew Vissanu Thanya Anan, executive secretary of the Thai Bishops Conference and former Vatican undersecretary for the Pontifical Council for Interreligious Dialogue, explained the idea behind the year.

“The Holy Year is an opportune time of grace and compassion for rediscovering the ardour of evangelisation, fruitfully accomplished by the missionaries in the past, and reconnecting to revitalise the mission of the Thai Church to the emerging challenges of today,” he explained in an interview with Catholic News Agency.

He added that new evangelisation, integrating faith and culture “will give an impetus for bolstering holistic interfaith and interreligious dialogue in the Asian context.”

Archbishop Francis Xavier Kriengsak Kovitavanij of Bangkok, president of the plenary council, presided over the Mass to open the Holy Year.

His homily stressed that there is a need for the Holy Spirit to help “boost the fervour of proclaiming Christ like the early apostolic community.”

“Let us pray for a new Pentecost for renewing our New Evangelisation,” Archbishop Kriengsak said, explaining that this “can be achieved by nurturing small ecclesial communities in order to renew their evangelical mission of proclaiming and living the Gospel.”

The Vatican has also issued a commemorative stamp marking the 350th anniversary of Synod of Ayutthaya.

The postage stamp is a joint issue with the postal administration of Thailand.

Depicted on the left side are the missionaries who received their mandate from the Pope, while on the right side is the Church of St Joseph of Ayutthaya, a place of Catholic worship in Thailand with more than 300 years of living testimony to the work of evangelisation.

The first Synod of the Catholic Church in Thailand was held in the former capital city of Ayutthaya in 1664. Three French Missionaries were sent by the Pope to Asia for direct evangelisation efforts there.

François Pallu, Pierre Lambert and Ignace Cotolendi travelled for a number of years, they had to be very careful and were often disguised to avoid persecution.

In Ayutthaya during the Reign of Siam, which was more tolerant and allowed religious freedom, they arrived in a small Christian community of around two thousand.

In 1664, the two Apostolic Vicars, Pallu and Lambert, and other religious and lay people organised an assembly. They wrote the “Monita ad Missionarios”, which had three main themes: the sanctification of the missionary in the salvation of Christians, evangelisation, and the organisation of local churches.

They also formed a seminary for the formation of indigenous clergy and found that the local young people were very intelligent and ahead of similarly aged children in Europe.

Today, the Catholic population of Thailand is less than 1% of the population. Some 95% of the Thai people are Buddhist, and many of the remainder are Muslim, making interreligious relations an important facet of life for Catholics in the south-east Asian nation.