More than 1,000 young people gathered in Knock this week to celebrate the tenth anniversary of the Pope John Paul II Awards. 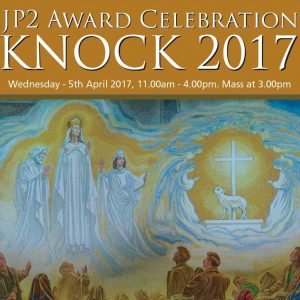 Launched in the Derry Diocese in 2006 by the then Papal Nuncio to Ireland, Archbishop Giuseppe Lazzarotto, the award is a way of encouraging and acknowledging young people’s involvement in the life of the Church and in the work of social justice.

Since then it has spread into 22 dioceses in Ireland and has also been instituted in two English dioceses – the Archdiocese of Birmingham and the Diocese of Hexham and Newcastle, with the result that more than 25,000 people have enrolled in the award scheme over the last decade. It is reckoned that the Pope John Paul II Award is the largest youth movement in the Irish Church today.

Examples of parish activities include reading at Mass, being an altar server or a Eucharistic minister, being a member of a choir or folk group, helping decorate the church and preparing articles for the parish bulletin. Social awareness activities include getting formally involved in a Church-approved charity such as the Society of St Vincent de Paul or getting involved in informal activities such as being a visitor to residential homes.

Generally, those who take part in the awards are aged between 16 and 18 and may or may not be involved in full-time education. If they are still at school, the award is recommended for fourth year or transition year students (or Year 13 in Northern Ireland).

In Knock on Wednesday, the young people had an opportunity to pray together and to share their experiences. They heard an inspirational talk by Elma Walsh, mother of Donal Walsh, the Kerry teenager who battled against cancer for four years before he died of the disease at the age of 16. While he was ill, Donal decided to start raising funds for good causes, and by the time of his passing he had raised more than €50,000 for charity. He also became a passionate anti-suicide campaigner.

Mass in Knock was celebrated by Bishop Donal McKeown of Derry, patron of the award, with priests from participating dioceses.

At the end of October, there will be a Pope John Paul II Award Pilgrimage to Rome as part of the tenth anniversary celebrations.

In a fortuitous coincidence, young people are the focus of this month’s Pope’s Intention, and the Pope’s Prayer video for April can now be viewed on Catholicireland.net. 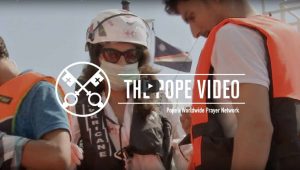 In the video Pope Francis says to young people: “I know that you young people don’t want to be duped by a false freedom, always at the beck and call of momentary fashions and fads.

“I know that you aim high. Is that true or am I wrong?

“Don’t leave it to others to be the protagonists of change. You young people are the ones who hold the future. I ask you to be builders of the world, to work for a better world. It is a challenge; yes, it is a challenge. Do you accept it?

“Pray with me that young people may respond generously to their own vocation and mobilise for the great causes of the world.”

The video accompanying the prayer shows images of a young woman exercising by lifting weights. We then see her with a rucksack, setting out on life’s journey and lastly working as an aid worker, helping in the rescue of refugees adrift in the Mediterranean.