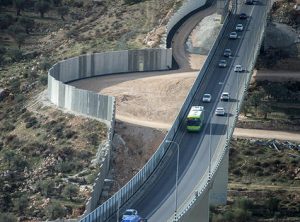 The Israeli Separation Wall and a road designed to carry Israel-only traffic in the Cremisan Valley, one of the last remaining green areas near Bethlehem (Pic HLC)

The Control of Economic Activity (Occupied Territories) Bill 2018 will go forward to a second reading in the Dáil. Yesterday TDs voted by 78 to 45 (with 3 abstentions) on the bill originally sponsored by Senator Frances Black.

Presenting the bill on Wednesday, Deputy Niall Collins from Fianna Fáil said that if the bill is passed “Ireland and her Parliament will be sending a strong message, that it condemns the occupation of territories which are deemed illegal under international law.” The bill, he said, was about “upholding international law” and applied “to illegal occupations anywhere in the world and not just to Israel and Palestine.”

He continued: “However, I am conscious that it is this occupation that has been the main focus of discussions on the bill. I want to state clearly from the outset that, if passed, this bill will not ban trade in Israeli goods. It will only ban those goods produced in settlements built illegally beyond Israel’s borders.”

Deputy Sean Crowe from Sinn Féin told the Dáil that “Goods and services only available because of gross human rights abuses and violations of international law should not be on sale in Ireland.”

In a letter to the Irish Times on Wednesday, two Catholic bishops, Bishop Noel Treanor of Down and Connor and Bishop Alan McGuckian of Raphoe, appealed to people to “recognise the significance of this bill and urge our TDs to be courageous in supporting it”.

Referring to their recent visit to the West Bank, the bishops said they had seen the “tragic impact” of illegal Israeli settlements. “These settlements, condemned as illegal by the United Nations, European Union and the Government of Ireland, stand in the way of a permanent peace between Israelis and Palestinians. As a country, we cannot continue to condemn these settlements as illegal under international law and then trade with them, making them economically viable,” they wrote.

“Let us be under no illusions – the products we buy from these settlements deprive Palestinians of their homes, their farms and their livelihoods.” Trade with settlements in the Occupied Territories legitimises their existence and ignores international law, they continued. “Therefore it is necessary to be consistent in ensuring that products produced or manufactured in these settlements do not end up for sale in shops and supermarkets in Ireland.”

The bishops said if the Control of Economic Activity (Occupied Territories) Bill 2018 is passed, “Ireland will be the first country in the world to legislate in this way and will become a world leader in taking decisive action to bring this conflict to a just and peaceful end”.

In a video tweet before yesterday’s vote, the Director of Trócaire’s international division, Sean Farrell, said political decisions mattered and had “deep consequences for people”. Speaking from Jenin refugee camp on the West Bank, he said the Occupied Territories Bill was an “opportunity for Ireland to say to these communities that we respect and we hold dear the values of international law.

“Respect for international law, for the dignity of all people and saying to these communities that we as a nation will not participate in economic activity with illegal settlements that have been stolen from Palestinians and built on Palestinian land – that is an important and key message to give to these communities at this time.”