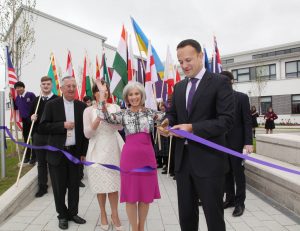 The opening of the first catholic secondary school in Ireland in 30 years was hailed by the Taoiseach Leo Varadkar as “an historic day” and a national event.

In his address at the official opening of Le Chéile Secondary School Tyrrelstown, Dublin, Mr Varadkar recalled how in 2011, the Government decided to allow parents to choose the ethos or religious or non-religious character of the school they wanted for their children.

“The families in this community of Tyrrelstown decided that they wanted their secondary school to a have a catholic ethos.”

The doors of the school opened in September 2014 in temporary accommodation, while building went ahead on the new campus, which the school shares with two feeder schools.

In his address, the Taoiseach recognised that “Ireland has changed a lot in 30 years” and he said, “most of that change is to be welcomed”.

“There is much greater diversity now in the type of education that we offer our children and true diversity must include the catholic religion as well,” he said.

“Catholic in its true sense means universal and is therefore inclusive by nature – inclusive of people, of other religions, other races and other nationalities,” he said and added that this was clearly seen in Le Chéile Secondary School Tyrrelstown.

Elsewhere in his address, the Taoiseach said that on behalf of the Government and the public at large, he wanted to “acknowledge the role of religious congregations in providing a system of voluntary national and secondary education in Ireland for centuries.”

“While we rightly acknowledge some of the wrongs by religious congregations in the past, we should never forget the enormous good that religious congregations have done for centuries in Ireland. Setting up schools, hospitals, providing public welfare long before Governments ever considered that to be part of their responsibility.”

Eventually there will be 1,000 students attending the new school in Tyrrelstown which has two dedicated special needs rooms.

“Like many people I believe education is the single best way that we can build a better life for people and their families, that is why education is very much part of the Government’s plans for the future,” the Taoiseach said. 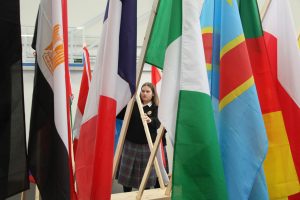 A pupil putting in place a flag, one of 67, showing the diversity of the students attending the new school in Tyrrelstown, Dublin. Pic John Mc Elroy.

He was presented with a pair of special Le Chéile socks by students so that his feet would also be welcome when they crossed the school’s threshold.

In her message, the principal of the new school, Dr Aine Moran, reminded students, staff, parents and political representatives that “A school is not just a building”.

“A school is the web of relationships that is lived out every day.”

She said Le Chéile Tyrrelstown was built on the strong foundations of the long and illustrious involvement in education of the 14 religious orders that make up the Le Chéile Schools Trust.

During the Mass, which was concelebrated by Archbishop Diarmuid Martin, Bishop Ray Field and local parish priest, Monsignor Eoin Thynne, water was brought forward by representatives of each of the 14 religious congregations that make up the Le Chéile Schools Trust.

The water was mixed together and used to bless the new school building and to water the trees that were planted to mark the historic day.

In his address, Michael Denny, chairperson of the new school’s board of management, paid tribute to the congregations of the Chéile Schools Trust and their traditions, wisdoms and charisms.

“In the end, it was the people of Tyrrelstown who chose Le Chéile to be the patron of their new school and in doing so placed their trust in Le Chéile to deliver the quality of education they wanted for their daughters and sons.”

“Parents are the first and irreplaceable educators of their own children and their choice of school is one of the most important decisions they will make on behalf of their children. By trusting this school to provide the best possible educational experience for their daughter or son, they place an enormous responsibility on the school,” Michael Denny said. 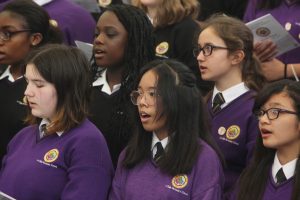 On behalf of the Board he thanked the parents for placing their trust in them and choosing this school for their children.

“Everything we do is intended to ensure that your child will receive the best all-round education to prepare her or him for the future, in a happy and supportive setting.”

In his homily, Archbishop Diarmuid Martin said there was “One word written in every corner of this school – opportunity.”

He said Le Chéile Tyrrelstown is a school rooted in a new community in Dublin and a school that “will really enrich that new community”.

“Education is about allowing every child to realise to the full his or her God-given potential and talents.”

“Education isn’t just about learning things, it is about making good people.”

Noting that the new secondary school is situated on the campus of three schools, he described the education centre as “a special place within the Tyrrelstown community”.

“It is where the future of this whole area will be formed. In many ways it is a sort of a mirror of the society we will have to live in in the future, where people of different values live side by side, being at the same time different but respecting each other and making an original contribution.”

He added that a catholic school must be one where each student can enter into and grow into the breadth, length, height and depth of what Christian love really means.

“We pray that this Le Chéile secondary school will be a place where love and respect can flourish.”