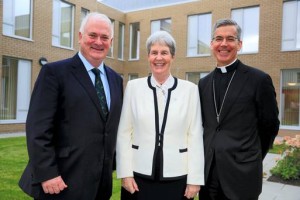 The former Taoiseach, John Bruton, and the Papal Nuncio, Archbishop Charles Brown, attended the opening ceremony of the new retirement home for the Missionary Sisters of the Holy Rosary on Thursday.

The former Taoiseach, who previously served as EU Ambassador to the USA and currently acts as President of the International Financial Services Centre, officially launched the centre and the Apostolic Nuncio blessed it.

Mr Bruton’s first cousin, Sr Elizabeth Barry is a member of the order and is one of the nuns who will be living in the new facility.

Mrs Sabina Higgins is Patron of the project. She is connected to the Missionary Sisters of the Holy Rosary through her cousins Sr Goretti and Sr Breda who are members of the Congregation.

The purpose-built new wing of the facility cost €3 million.

The facility will house 23 retired Sisters belonging to the Missionary Sisters of the Holy Rosary who are also known as the Killeshandra Sisters.

It caters for Sisters who have returned home in recent years after serving overseas in the developing world.

The Sisters are now fundraising to pay back the loan they took out to cover the €3m cost.

The Sisters have chosen Philadelphia as the headquarters for their fundraising campaign due to the Order’s ties with the US.

The Sisters have long links with the Delaware Valley. One of their founders in 1924, Sr Philomena Fox, was from the area and their current Congregational Leader, Sr Maureen O’Malley attended Archbishop Prendergast High School in Upper Darby.

The Missionary Sisters of the Holy Rosary were founded by Bishop Joseph Shanahan in 1924 when he realised that missionary efforts in Nigeria were focused on the male population.

He saw that women were not being adequately catered for by the missionary movement.

Bishop Shanahan approached various Societies to address this need but they were unable to commit at the time, so the Bishop decided to form a new missionary congregation for women.

Many Holy Rosary Sisters have spent over 50 years bringing education, healthcare and the Christian message to the people of Africa.

In some cases, this has entailed enduring many diseases, adversity and civil war.

The Sisters initiated educational, health, pastoral, development and human rights programmes which empowered the local population, male and female, to take on the responsibility of continuing their work.

During those years, all the funds raised by the Sisters were used to further their mission abroad.

They did not think about their future or where they would spend their final years.

As a result, many of the Sisters are returning to Ireland for a well-deserved retirement, needed to be provided for.

The Order realised that it would be necessary to construct a facility to adequately accommodate them and this was funded by a loan.

The Sisters are not seeking the financial assistance of the Irish-American community to help support these wonderful women in the twilight of their lives.

A capital campaign to raise the €3 million to cover the debt has been divided between Ireland and the US. The goal for Ireland is €1 million and for the US is €2 million.