Taoiseach lines up with ambassadors for ‘Story of Love’ concert 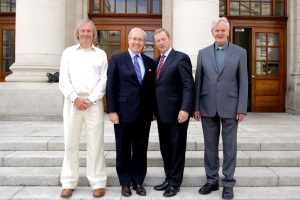 By Pat Coyle of the Jesuit Communications Centre

The Taoiseach Enda Kenny and ambassadors from around the world got in line recently for a photo shoot promoting The Story of Love concert.

The concert, composed by Dublin-born musician Willie Hughes, will be streamed live to millions around the world and takes place in Knock Co. Mayo on Saturday 15 and Sunday 16 October, 2016. (Watch short video here)

The concert brings together a production team of top Irish professionals including Niamh White former director of The Late Late Show; Mark Cahill music producer for Liam Lawton; Fiona Cunningham production designer The Voice of Ireland; Luis Peveda, Riverdance. After the performances in Knock Co Mayo, The Story of Love will tour the USA.

Many embassies were represented at previous performances of the concert in Farmleigh and Dublin Castle, including: US, Canada, India, Mexico, Italy, Greece, Turkey, Poland, Romania and Estonia.

Hughes says the event is an antidote to the social and political breakdown unleashed in recent times and the general fracturing of societies and communities around the world.

“In many places around the world we are witnessing the shattering and tearing apart of community. Brexit is threatening the stability of the EU and fracturing the UK. The North’s peace process is now a cause for concern.”

But he says there is another voice also being heard.

“Young people especially are talking about the vision of unity and community that first inspired the founding fathers of the European Community. There is a growing call from almost every side for a new spirited re-emphasis of these founding values. The Story of Love answers this deep felt need for human solidarity and caring for one another and our planet.”

The opening sequence of the concert is a screen presentation of creation, along with the Sistine Chapel Choir.

Screenings feature throughout the concert which ends with a massive Universal Choir of Love made up of choirs from around the world including the Sistine Chapel Choir Rome; St Patrick’s Cathedral Choir New York; Metropolitan Cathedral Choir Mexico City.

It also features choirs from Hiroshima, Manila, Melbourne, and many more countries.

In a grand and groundbreaking finale, they will all video link in to sing: ‘We Believe: It’s All About Love’.

The concert is a four-part love story of love, loss, forgiveness and reconciliation told through song.

Jesuit author Fr Brian Grogan supervised the story-line and says a key theme in the concert concerns our responsibility as a race to the earth, our common home.

“A new vision is needed today to ensure our collective survival. ‘Without vision the people perish’ as we say. The vision of artists can help us here and I know of no vision more profound than Willie Hughes portrays in The Story of Love. It offers hope that together we can forge a caring world in which everyone can share.”

He says The Story of Love has a message for politicians, economists, business people and everyone of goodwill.

“The message is that love for others and for our endangered planet is the key to the well-being of the human race.”

Concert composer Willie Hughes says the aim of the concert is to celebrate the inter-connectedness and the interdependence of humanity, planet earth and the divine.

And to promote inclusiveness in a world increasingly dominated by negative patterns of exclusion.

“We all know that the world is in a mess, with greed threatening to choke everything. But peoples’ hearts are good. We want to touch them with an experience of global togetherness”, says Hughes.

While the concert’s primary focus is on togetherness it is by no means all milk and honey, according to Hughes.

“It has a steel core that doesn’t pull its punches but hits hard against global greed. We’ll be screening Images of child slave labour in Ivory Coast and Ghana where 70% of all chocolate comes from.

Willie Hughes says that Mary the mother of Jesus appeared to the local people of Knock at a time when they were in great distress, suffering from famine and poverty, so it’s a fitting place for the concert.

As well as the Taoiseach and a variety of ambassadors, Willie Hughes has the support of Irish President Michael D. Higgins; Papal Nuncio Archbishop Charles Brown; Archbishop Michael Neary and Bishop Eamonn Walsh.

Michael Flatley, of Lord of the dance fame, has said about Willie Hughes, “How wonderful to see someone follow their dream in bringing to the stage a production centred on that most noble of sentiments – love.”

The concert will be streamed live on the prayer app website of Pope Francis.

Tickets for The Story of Love concert are available from Ticketmaster and the basilica office in Knock.