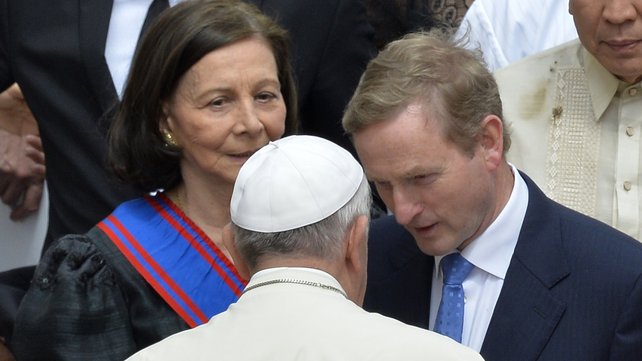 The Papal Nuncio to Ireland has welcomed the invitation extended by the Taoiseach Enda Kenny to Pope Francis to visit Ireland.

Speaking after he concelebrated a Mass to mark the canonisations of Saint John XXIII and Saint John Paul II in Knock on Divine Mercy Sunday, Archbishop Charles Brown said the invitation gave him “great joy” and that it also gave him hope that “something might be possible.”

In Rome on Sunday afternoon, the Taoiseach told reporters at the Irish College in Rome that “While it’s not an official responsibility of the Government, I did say that if the Church authorities extended an invitation and he’s willing to travel, the Government will see to it that everything is done to make that visit a real success.”

Flanked by Cardinal Sean Brady, Mr Kenny said, “It would be my hope that if it does happen, that the Pope would travel to Northern Ireland as well, given the changed events in politics where you’ve had the circle of history closed, as Her Majesty referred to, with her visit a few years ago, and Uachtaran Higgins’ visit to Britain in the last few weeks. The events warrant to be built upon”.

Asked how Pope Francis had reacted to his invitation, Mr Kenny said, “Well, I wouldn’t say that his eyes lit up, but he did of course recognise the country I was speaking about, and the invitation is extended officially through the church authorities.”

In another surprise announcement, Mr Kenny said the Tanaiste, Eamon Gilmore, would be bringing the name of a new ambassador to the Holy See to the Cabinet meeting this week.

According to the Irish Independent, the Taoiseach said, “I expect the Tanaiste to bring a name to Cabinet on Wednesday for appointment as ambassador to the Holy See.”

He also said the double canonisation of the two modern popes was “an extraordinary event and I was happy to be here on behalf of the Irish people”.

In Knock on Sunday afternoon, the Papal Nuncio said he would be consulting the bishops regarding the Taoiseach’s invitation to the Holy Father.