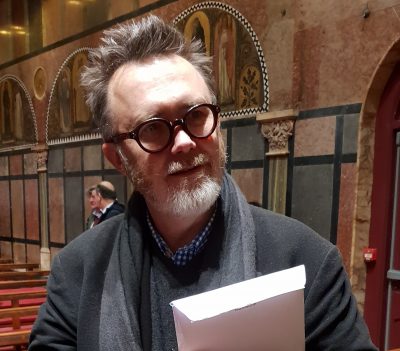 Best selling author and conservative thinker Rod Dreher drew a crowd of 350 to University Church, Dublin on Monday evening to hear him outline his thoughts on how Christians need to respond when they find themselves in a minority situation.

On his first visit to Ireland, the American blogger and editor at ‘The American Conservative’ and author of several books, including How Dante Can Save Your Life and The Benedict Option told the packed church, “I know that times are hard now for Irish believers.”

He warned that times were not going to get any easier, “especially as elites who hate the Church use her sins and failings in an attempt to discredit everything about Irish Christianity. It is a lie.”

He added, “Introspection in light of the abuse scandal is good and necessary, but please do not allow the Church’s critics to drive you to self-hatred.”

Referring to videos that surfaced at the weekend of students from Covington Catholic High School in Park Hills, Kentucky, purporting to show the students confronting and mocking a group of Native Americans, Rod Dreher said “a bunch of Catholic high school boys were defamed by a set-up at the March For Life. They were made to look like they were abusing an elderly Native American. It wasn’t true, but before all the facts were in, their diocese and their school had apologised to the world for the bad behaviour of those boys – even though the kids had done nothing wrong.”

The 51-year-old father of three said the concept of civilisational collapse is hard for most to conceive, especially living amid the relative peace and prosperity of contemporary Europe and North America.

“But that is what is happening. We can point to a number of factors, including steep population decline, the migration crisis in Europe, gender ideology, and other manifestations of what St John Paul II condemned as a ‘culture of death’. These add up to a widespread loss of meaning, purpose, and cohesion.”

The steep decline of religious belief in Western society is not an isolated phenomenon, he said and added that it is connected to a general disintegration of institutions and traditions within our societies.

The Louisiana native said he believed that Benedictine monasticism offered practical help to Christians today and he called the choice facing all Christians  – “the Benedict Option”.

Addressing the context in Ireland, he said Christians here woke up one day to discover that their country was post-Christian.

“I have watched over the past decade or so as the sex abuse scandals poleaxed Irish Catholicism. Despite these events, I had a hope that ‘Fortress Ireland’ would be able to come through with its faith largely intact. For so long, theologically orthodox American Catholics – many with Irish roots – looked to Ireland as an impregnable stronghold of faith.”

However, the abortion vote confirmed his worst fears. And, since arriving for his visit, Irish Catholics have told him story after story about the “feebleness of the faith and demoralisation of the faithful”.

He added, “In Ireland, the abuse scandals have badly damaged, perhaps even destroyed, the moral authority of the Church. But even if you had not had these scandals, you would still have been in grave crisis. As in the US, the scandals have only revealed how weak the faith had become behind the façade of cultural Christianity.”

He suggested that Christians have to “fundamentally, and creatively, reconceive our roles as Christians within society – and that includes rethinking our ways of making the faith resilient in our own lives.”

Rod Dreher, who was introduced on Monday evening by writer and commentator John Waters, said that the former prior of the Benedictine monastery in Norcia, Fr Cassian Folsom, had told him that any Christian family that wants to make it through what’s coming, with their faith intact, must take some form of the Benedict Option.

Fr Folsom also urged Dreher to go over the mountains from the Italian monastery and visit a group of Catholic families living out these ideas in an extraordinary way on the Adriatic.

The “Tipi Loschi” – Italian for “the usual suspects” – is a group of about 20 Catholic families “who are thriving as joy-filled believers”.

They were founded in the 1990s by a group of young Catholic men who wanted something more out of the Christian life than the bland, conformist Catholicism of their parish, Rod Dreher related.

“Eventually they married their girlfriends, and put together a fellowship. They started a school, the Scuola G.K. Chesterton. They have a clubhouse that they use as a meeting place for Bible study, for catechesis, for festivals, for gardening, for feasts, and all kinds of activities that build up the community. They also serve people outside the community in acts of charity. They all live in normal apartments around the city, and go to their parishes for Sunday Mass. But the Tipi Loschi and their families all know that they need each other.

“They are quite orthodox in their Catholicism, and they are completely undeceived about the crisis in the Church and in the world. But they are not angry about it! They are the happiest Christians I know.”

According to Dreher, Marco Sermarini, one of the founders of the Tipi Loschi, told him that they discovered nothing new through their movement. “They only re-discovered traditions within the Church that had been hidden away and forgotten.”