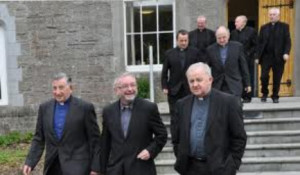 The bishops have expressed their concern over the prospect of the right to life being removed from the unborn, warning that it would be “a shocking step” for Irish society and “a manifest injustice”.

In a statement issued as they met for their Spring General Meeting in Maynooth, the hierarchy stressed that making abortion freely available desensitises people to the value of every human life.

“Every one of us has a right to our life. It is not given to us by the Constitution of Ireland or by any law. We have it ‘as of right’, whether we are wealthy or poor, healthy or sick. All human beings have it,” they stated.

They said that for Irish society to now declare that any category of human being should have that right taken from them would be a shocking step. “It effectively says that unborn children do not exist or, if they do, they do not count.”

That, they stressed, “is a manifest injustice”.

The bishops described Article 40.3.3 as a declaration of equality and respect for human life.

“It represents, at the very foundations and substructure of our laws, a conviction that all human life is worth cherishing equally.”

They warned that repealing it would leave unborn children “at the mercy of whatever permissive abortion laws might be introduced in Ireland in the future”.

Stating that the scientific evidence about the beginning of human life has never been clearer, they underlined that today, thanks to this evidence “we see more clearly that human life begins at conception”.

“There is no later stage in a baby’s development where we can say; ‘up until now the foetus was not a person and now it has become a baby’.”

The bishops said it was therefore a great irony that Irish society was for the first time in its history losing “our clarity about the right to life of the unborn”.

“Knowledge about the mysterious workings of DNA and the stunningly vivid evidence of ultrasound images of little persons in the earliest weeks in the womb should be making us more committed than ever to the protection of unborn life.”

Elsewhere in their statement on Tuesday, the Bishops’ Conference said that in using the word ‘choice’ people need to remember that, for the baby waiting to be born, the choice people make can be a matter of life or death.

Speaking to CatholicIreland.net, Bishop Kevin Doran said that the bishops’ view is that “every individual human life is worth respect and so we oppose abortion under all circumstances, not in a sense of being negative but in a sense of because of our deep regard and respect for life of every person which we believe is shared by the vast majority of people in Ireland.”

In a statement also issued on Tuesday, Bishop Leo O’Reilly of Kilmore highlighted that the Church has never taught that the life of a child in the womb should be preferred to that of a mother.

Bishop Doran told CatholicIreland.net that this was a position which the bishops had made clear in previous statements.

“The Church’s position has always been pretty much the same as the current text of the Constitution – the church has never taught that the life of the child in the womb is to be preferred to that of the mother. By virtue of their common humanity, the mother and her unborn baby have a human right to life,” he said.

“Where a seriously ill pregnant woman needs medical treatment which may as a secondary effect put the life of her baby at risk – treatments are always ethically permissible,” Dr Doran said.

In his statement, Bishop O’Reilly said that people were being told that the Eighth Amendment puts the lives of pregnant women at risk because abortion is not freely available here.

“But statistics available for 2015 show that Ireland, with the Eighth Amendment, is a safer place than the UK for pregnant women, where there is abortion on demand and there are 200,000 abortions every year. Ireland is a lot safer for women than the US where there have been an average of a staggering one million abortions a year for the last fifty years,” Dr O’Reilly said.

Referring to arguments by campaigners for the repeal of the Eighth that abortion is necessary in order to avoid the risk to women’s lives posed by some medical conditions during pregnancy, Bishop O’Reilly like Bishop Doran, stressed that where a seriously ill pregnant woman needs medical treatment which may put the life of her baby at risk, such treatments are always ethically permissible, provided every effort has been made to save the life of both the mother and her baby.

On the issues of rape or when an unborn child is diagnosed with a serious illness, Bishop O’Reilly highlighted that he had heard many women who experienced these situations say that there is often subtle and not so subtle pressure from doctors to have an abortion.

“If we ask ourselves what we would do in these situations a month after the birth, instead of a month before, we would be horrified at the suggestion that taking the child’s life was an option. On the contrary we would give them the same treatment and care as we would any other child. Unborn children are more vulnerable and defenceless and therefore in greater need of protection, not less,” he said.