As part of international observance of the UN’s World Day Against Trafficking in Persons today, the Church’s humanitarian aid organisation, Caritas, has called on world governments to increase efforts to identify victims of trafficking and exploitation..

The Vatican-based charity, of which the Irish aid agency Trócaire is a member, says that it believes that the COVID-19 epidemic has assisted human traffickers in their evil trade.

“While governments’ attention has been focused on the health pandemic, the ongoing pandemic of human trafficking has continued,” says Aloysius John, general secretary of Caritas International.

“Migrants and informal workers are the most vulnerable. They have been most hard hit by measures enacted by governments to contain the spread of the virus. Furthermore, lockdown measures have increased the difficulty for trafficking victims of escaping and finding help when they are held in situations against their will.

“To further aggravate an already dire situation, those organisations assisting trafficked persons have themselves “faced decreases” in financial support, and thus, in their ability to provide services.”

The International Labour Organisation (ILO) believes that some 40 million people in the world are trapped in the grip of human traffickers. In effect, the ILO estimates that one in 200 people worldwide are still being forced into work and living conditions that are akin to modern-day slavery.

According to the UN, people are chiefly trafficked for the following reasons, in order: sexual exploitation (59 percent), forced labour (34 percent), forced marriage, for selling children and for creating child soldiers, as well as for the removal and sale of human organisations. Most victims are trafficked within their own home countries’ borders, but those who are trafficked abroad are most usually moved to the world’s richest countries, including the Middle East, Europe and North America.

The UN believes that women make up 49 percent of trafficking victims and girls another 23 percent. 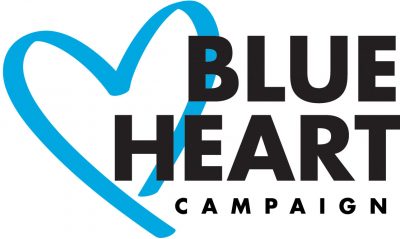 To help raise public awareness about the issue globally, the UN has launched a Blue Heart campaign, with those who wear the symbol expressing their solidarity with the victims of human trafficking, while also reminding people of the cold-heartedness of those who buy and sell their fellow human beings.

Monies raised from the sale of Blue Heart badges and via Blue Heart events will go towards the United Nations Voluntary Trust Fund for Victims of Trafficking in Persons, which provides vital assistance and protection to the victims of trafficking through specialised organisations across the globe.

In a separate development, the United Nations High Commissioner for Human Rights and the International Civil Aviation Organisation have launched an online training video for airline cabin crew to help identify, and rescue, possible victims of trafficking on board their flights.