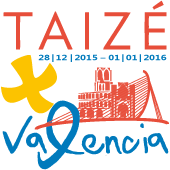 Pope Francis has urged more than 30,000 young people at a Taize meeting in Spain to have the courage of mercy.

In a message to those gathered at Valencia for their European Meeting of Young Adults, the Pope said that mercy “will guide you not only to receive it in your lives but also to be close to those who are in distress.”

“You know that the Church is here for all of humanity and where there are Christians everyone should find an oasis of mercy.”

He emphasised that this “particularly applies to the many migrants in such need of your welcome.”

Brother Alois, the leader of the Taize community, is with the young people in evening prayer during the event which runs most of this week from Monday 28 December – 1 January 2016.

He referred to the young Spaniards as spiritual ‘sons and daughters’ of Saints Teresa of Avila and John of the Cross who awoke mystical life in Spain.

“Now your generation is called in its turn to light in your country the fire of renewed faith,” he said.

He also spoke of how he spent Christmas in Syria and how everyone there asked him to pray for them.

He added, “Let us listen to their call and confide to God those who suffer violence in the Middle East. Let us carry within ourselves the poignant questions they ask: Why all this violence? Where is God?”

The Syrian city of Homs, which he said is mostly in ruins, and like a ghost town, is now seeing some families returning to resettle but they have no water or electricity.

In front of the ruined Greek Catholic cathedral in the centre of Homs parishioners celebrated a Christmas party for the children with presents made by local young people.

“I have rarely experienced a Christmas party where the Gospel message of peace was felt so strongly,” he recalled.

“At Christmas we remember that Jesus came to bear witness to the infinite mercy of God. Violence was unleashed against him, but it could not overcome his love.”

He said that all the migratory, ecological, or social troubles in the world today are challenging believers of the various religions and non-believers, and require “new forms of solidarity”.

He posed the question of how to contribute to peace and what to do when faced with conflicts which have already broken out and when the “spiral of hatred and revenge” is difficult to interrupt. He said that peace must come from the peace that God communicates to us.

“To become women and men of peace we need courage. It is the courage of the Gospel, the courage of mercy that drives us to open our heart to every human being unconditionally,” he said. 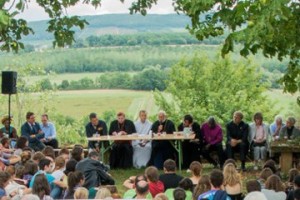 The Archbishop of Canterbury, Justin Welby, in his message expressed the hope that the meeting of young Christians would signal hope against the current mood of despair, conflict and injustice in the world.

He urged those gathering from around Europe to reflect together on the need to entrust themselves to the merciful God and “on learning to forgive over and over again, and on expanding mercy beyond the personal to its social and environmental dimensions. His Holiness Pope Francis has called for the coming year to be a Year of Mercy. It is, therefore, significant that the call is taken up ecumenically by young people.”

“This is the first resolution to focus solely on the role of young people in peace building and countering violent extremism. Like the Council’s historic resolution 1325 on women, peace and security adopted 15 years ago, this new text opens new opportunities for tapping the great power of youth in building sustainable peace and preserving international security.”

He said he will count on the young participants to help advance shared goals of peace, development and human rights, and to make 2016 a great success in building a future of dignity for all.