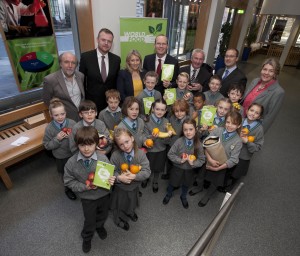 A new booklet which is being distributed to schools and homes for United Nations World Food Day today (16th October) addresses the issue of how to end world hunger.

“This booklet demonstrates the kind of approach we need to end world hunger, with Government and State bodies, NGOs and the private sector all working together,” Dominic MacSorely, CEO, Concern Worldwide said.

“Concern is delighted to join this partnership and hopes that primary students all over the country will enjoy the booklet and learn a great deal from it,” he said.

The booklet is a collaboration between Department of Agriculture, Food and the Marine, Gorta, Agri-Aware, Concern, Junior Achievement Ireland and Irish Aid. It was available in Saturday’s Irish Times and is being distributed directly to schools around the country.

Launching the booklet, Minister Simon Coveney underlined that Irish agriculture can play a role in reducing world poverty and hunger.

“I hope that this publication can be a useful tool for both schools and parents to use in discussions with their students and children about world hunger and raise awareness of the role that sustainable agriculture in Ireland and Africa can and must play if global hunger is to be eradicated,” Minister Coveney said.

Helen Raftery, CEO, Junior Achievement Ireland said that by joining with friends in Junior Achievement Uganda to relay the stories of one Irish and one Ugandan student who tell of their involvement in food production, her organisation hopes the students’ message of the importance of working hard in school and the fun in their work in food production resonates with younger readers. 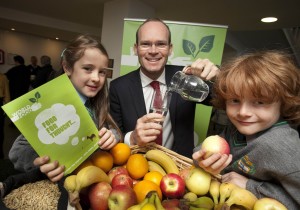 Gareth Crowe, Gorta’s Community Fundraising Manager, said that his organisation has been associated with World Food Day since its inception. This year’s collaboration has enabled the booklet to be produced.

Bernard Donohue, Chairman of Agri Aware and Executive Director, Dr Vanessa Woods said, “World Food Day isn’t just a celebration of culture and nutrition, nor is it solely a way to address world hunger. Increasingly, rather, it is about education – teaching young people about food origin and sustainability, to ensure a safe supply of food for the years and future generations to come.”

The booklet includes facts and figures such as how about 700 million fewer people lived in conditions of extreme poverty in 2010 than in 1990, although 1 in 8 people in our world will go hungry today.

It also includes stories such as that of Juliette in Jumba-Kibone Uganda and the children’s typical daily life and diet and the important foods and crops. This can be compared with the story of Tadgh from Co Limerick who lives on a farm.