When politicians call to your door looking for your vote in the General Election on Saturday 8 February, the Society of St Vincent de Paul wants you to ask them about their plans to end the misery of poverty in Ireland today.

The society is calling on the party or parties who form the next government to follow the example of Canada, Scotland and New Zealand and introduce a Poverty Reduction Act.

Such a piece of legislation would make the achievement of the UN Sustainable Development Goal of ‘No Poverty’ by 2030, legally binding.

Currently, in Ireland there are nearly 700,000 people who live below the poverty line and the SVP’s head of social justice, Dr Tricia Kielthy says: “With rising living costs, the housing crisis and a high number of people living on low incomes, our economy isn’t working for everyone and many are being left behind.

“This is not inevitable, and poverty eradication is possible, but it requires well designed policies, resources and political will. Enshrining commitments for poverty reduction into law would send a clear signal that the interests of those most marginalised in society are at the top of the national agenda.”

This week the SVP, which is Ireland’s biggest charity, published an Election 2020 Priorities document, entitled Investing in measures to end poverty. 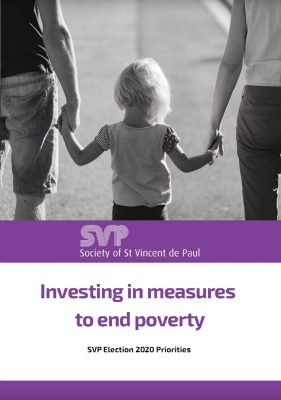 The cover of the SVP Election 2020 Priorities document

“We want the next Programme for Government to take decisive action so we can see an end to poverty once and for all,” said SVP national president Kieran Stafford. “It won’t be easy and will require making difficult policy decisions but investing in a more just, compassionate and equal society will reap benefits in the long term, for individuals, families, communities and our wider society.”

The SVP Election 2020 Priorities document, also sets out actions for housing, education, adequate income, and transport and energy, that it believes all political parties and independent candidates should support.

The SVP is Ireland’s largest charity. Last year it received more than 150,000 requests for help from people in difficulty because they did not have enough funds to cover basic essentials such as food, fuel, electricity and their children’s education.

“In our experience, the biggest driver of poverty in recent years is housing costs,” said Mr Stafford.” At a fundamental level, it is impossible for anyone to find a route out of poverty if they do not have safe, decent and affordable housing. The next Dáil must commit to an ambitious building programme of social and affordable housing, led by the Local Authorities.”