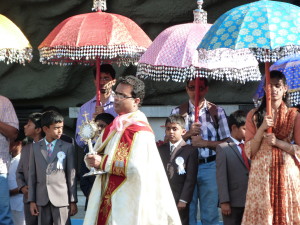 Up to 800 members of the Syro Malabar Catholic community in Ireland gathered to celebrate the Feast of St Thomas in Dublin on Sunday.

The two-hour East Syrian Rite Mass at St Mary’s Church in Inchicore was celebrated by Bishop Joseph Kunnath, CMI, of the Syro-Malabar Catholic diocese of Adilabad in India.

He was assisted by eleven Syro Malabar rite priests from all over Ireland, including Dublin, Cork, Limerick and Galway according to Fr Antony Nallukunnel, OFM Conv.

The Franciscan friar, who is based in Dublin’s Fairview, explained to CatholicIreland.net that the community always comes together for the feast day of their Church’s founder, St Thomas. This year the feast fell on 5 July but the special liturgical celebration was held over until yesterday. 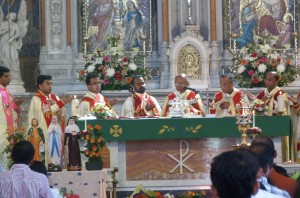 The Syro-Malabar Catholic Church is an East Syrian Rite Church in full communion with the Catholic Church. Currently the Syro Malabar church in Dublin numbers around 4000 members.

It is the largest of the St Thomas’ Christian denominations with around four million faithful. It traces its origins to the evangelistic activity of Thomas the Apostle in the 1st century and it is also the second largest Eastern Catholic Church in communion with Rome.

The liturgy in Dublin was held in Malayalaam, the mother tongue of most of the Indian community in Ireland who hail from Kerala. 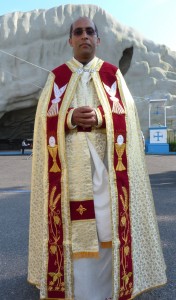 “Ninety-five percent of them are Syro Malabar Catholics from Kerala,” according to Fr Antony Nallukunnel. He explained that in India, there are three rites within the Catholic community. The Roman rite is the largest community.

“The second is the Syro Malabar Catholic community and St Thomas is the patron and founder of this and then we have Syro-Malankara Catholic Church,” he said.

In his homily, Bishop Kunnath spoke of St Thomas the Apostle’s strength of character and willingness to preach the faith.

He recalled that it was St Thomas who demanded to see Jesus’ wounds and it was also St Thomas who told the Lord, ‘We don’t know where you are going so how can we know the way’. To which Jesus replied,‘I am the way, the truth, and the life’.

Fr Antony explained that the Syro Malabar liturgy is “long and there is a lot of repetition. There are a lot of signs and symbols in the liturgy- such as the use of the thurible and the gestures the main celebrant uses during the Mass – such as bowing and the gesture of his hands.”

He said that though the ceremony is “long”, people are happy to attend “because this is the way that they express their own faith – a faith that goes back 2,000 years.”

The Franciscan friar said that though the community get together once a month to attend a designated Syro Malabar liturgy and catechism classes, normally on week days members of the community participate in their local Latin rite churches. 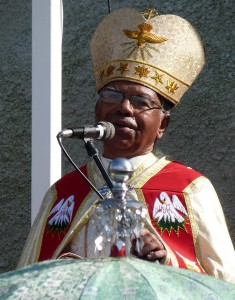 Bishop Joseph Kunnath is the first bishop of the Syro-Malabar Catholic Diocese of Adilabad, which was created by Pope John Paul II in July 1999.

It is believed St Thomas the Apostle landed at Kodungalloor in 52 A.D and established Christian communities in different parts of India. He died at Mylapur in 72 A D. According to tradition, he founded seven churches or communities in Kerala; at Kodungalloor, Niranam, Kollam, Chayal, Kottakkavu, Kokkamangalam and Palayoor.