Home > Featured > Syro-Malabar Church to be headquartered in Rialto

Syro-Malabar Church to be headquartered in Rialto 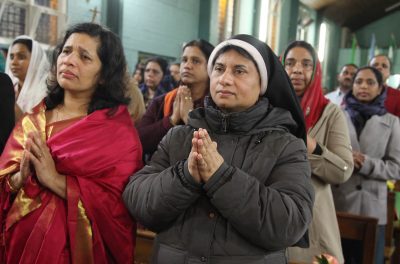 Members of the Syro-Malabar community at prayer at Our Lady of the Rosary of Fatima Church in Rialto (Photo: John McElroy).

A new headquarters for the Syro-Malabar Church was inaugurated in Rialto last week.

Our Lady of the Rosary Church in Rialto was packed for the inauguration on Thursday last where Cardinal Mar George Alencherry, of the Archeparchy of Ernakulam-Angamaly in Kerala, was chief celebrant, alongside Archbishop Diarmuid Martin of Dublin.

The Syro-Malabar Catholic Church, chiefly located in Kerala in south-western India, has 4.6 million followers worldwide, including some 4,000 in the Dublin Archdiocese.

Founded by St Thomas the Apostle in the 1st century AD, it earns its name from the fact that it follows the Assyrian Rite in religious worship, using the East Syriac dialect as its liturgical language, and the fact that Kerala is located on the Malabar coast. It is the largest of the Christian denominations founded by St Thomas and it is the third-largest particular church of the Catholic Church, after the Roman Church and the Ukrainian Greek Catholic Church.

In Ireland, the community meets to worship in 33 different Mass centres, known as qurbana, and seven of these are in Dublin. 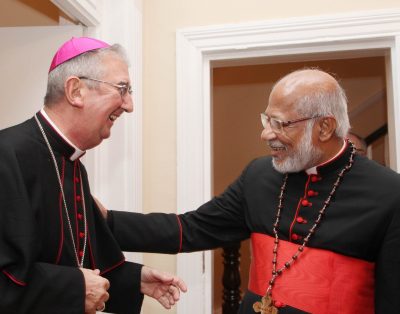 As you might expect, the members of the Syro-Malabar church in Ireland are mainly migrants and, as such, have particular needs. To that end, Archbishop Martin has appointed Fr Jose Bharanikulangara and Fr Anthony Cheeramvelil to help with their pastoral needs.

Meanwhile, Archbishop Diarmuid Martin has announced the merger of three Dublin parishes into one this week. The new parish of St Pappin’s in Ballymun incorporates the former parishes of Shangan, Balcurris and Sillogue. The Church of the Holy Spirit on Sillogue Road will be the parish church with the Church of the Virgin Mary, on Shangan Road, and St Joseph’s, in Balcurris, acting as chapels-of-ease.

As a sign of the diocese’s commitment to the two chapels-of-ease, more than €100,000 has been spent on renovating the two buildings. The former presbytery at St Joseph’s is also being renovated and redeveloped as a pastoral centre, at a cost of €250,000.