As fighting continues in Syria despite a UN resolution calling for a ceasefire, Trócaire says it is receiving tragic news from volunteer aid workers in the capital Damascus.

The Irish overseas aid agency works with a number of organisations trying to provide relief to the victims of the civil war, which has raged since the so-called ‘Arab Spring’ of 2012. The government of Syrian President Bashar al-Assad has been able to remain in power thanks to the backing of the Russian government, which is providing air power to bomb rebel-held areas such as Ghouta, which lies to the east of Damascus.

Trócaire’s executive director Éamonn Meehan described the messages that he is receiving from colleagues working in Syria as ‘heartbreaking’.

In Ghouta, the civilian population is having to remain in underground shelters, with little food or water, because of almost constant bombardment and air strikes. Much of the city’s infrastructure has been reduced to rubble. For example, an organisation that supports women affected by the conflict, Women Now, has had to close all three of its centres in Ghouta, with two of those centres completely destroyed.

In a message to Trócaire, Lubna Alkanawati of Women Now wrote: “Our colleagues are trying to stay alive with their families in the dark and ill-equipped shelters along with all other families of Eastern Ghouta. The shelters are not supplied with enough water or food, and children have not seen sunshine for weeks. We appeal to everyone of you to raise your voices for the families of Ghouta before we see a repeat of Aleppo. The violence needs to stop now and civilians need to be safe from bombing and shelling.” 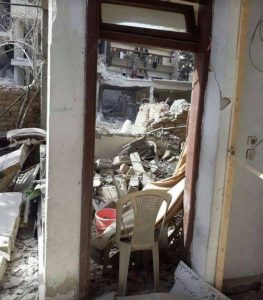 The ruined remains of one of the Women Now centres in Syria that was supported by Irish aid donations. (Pic Trócaire)

Trócaire’s main partner in the country, Caritas Syria, has had to close its aid centres in Damascus. It issued this statement: “People in Damascus are very depressed. They were optimistic in the last few months, and they felt that they reached the end of war; they feel now that they are back to zero. Most of the families who are living in the eastern part of the city stopped sending their children to schools. Main streets and squares that are usually very crowded during the day are now almost empty. All people are very [cautious] in their movements.”

Another partner agency, Jesuit Refugee Service (JRS), reported: “Yesterday, in Damascus city, 15 people were killed and about 50 injured. Around east Ghouta, something like 100 people were killed and several hundreds injured. The situation today is very, very bad. One of our colleagues was injured yesterday by a missile’s fragment in her shoulder. Another colleague’s house was hit by a mortar shell.”

Éamonn Meehan commented: “The basic rules of war have been long forgotten by the many actors in this brutal conflict. Civilians are not safe. They are denied food, protection and other humanitarian assistance.

“The international community can no longer stand idly by as this devastating human tragedy continues to escalate. There is an urgent need for a ceasefire and guaranteed access for humanitarian organisations to provide aid to the civilian population.

“Right now, people are huddled into shelters, fearing that they will not see tomorrow. Attacks on civilians must stop. The deafening silence from the international community must also end.”