Syrian nun to discuss plight of Christians with Irish TDs 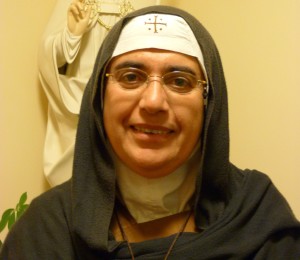 A spokeswoman for the Catholic Church in Syria is to meet members of the Dáil on Wednesday to discuss the situation in Syria and specifically the plight of the country’s Christians.

Mother Agnes Mariam of the Cross is the Superior of the Deir Mar Youcoub monastery in Qara near the Syrian city of Homs.

She is also the International Coordinator for the Mussalaha Initiative.

Mussalaha, which in Arabic means reconciliation, is a community-based non-violent initiative which has emerged from within civil society in Syria.

Religious, family and ethnic leaders have met through its auspices to promote peace and reconciliation within an increasingly fragmented and fractious Syrian society.

It sees itself as an alternative to the violence of insurrection or international military intervention.

The initiative emerged in June last year in Homs following the attendance of representatives of Alawaites, Sunnis, Christians, Shiites, Arabs and Druze at a meeting which resulted in a number of joint declarations on building peace and mutual respect in Syria.

The most recent high profile aspect of Mussalaha’s work was the highly successful negotiations for the evacuation of thousands of distressed people form the rebel held town of Moadamiya in Damascus province.

A Melkite Greek-Catholic Carmelite, Mother Agnes Mariam has crossed between government and rebel controlled zones in the provinces of Idlib, Homs, and Damascus over the past year.

She will relate her first-hand experiences of the situation on the ground to the politicians she meets.

The majority of displaced Syrians still reside within the country and with the onset of winter their situation is of real concern according to the nun.

Mother Agnes Mariam also hopes on Wednesday to discuss the plight of the Christian community in Syria and the absolute disaster that has befallen this minority.

After 32 months of conflict, one quarter of Syria’s Christian community are either out of the country or internally displaced. Over 100 Christian towns and villages along the Orontes river have been completely depopulated with the Christian districts of the city of Aleppo  held in siege-like conditions.

Little or no attention in the western media has been paid to this aspect of the conflict save for an occasional mention as was the case with the attack on the Aramaic-speaking Christian town of Maaloula in September.

There have been constant attempted attacks on the neighbouring Aramaic-speaking Christian town of Saydanaya, while the old testament Christian town of Sadad ‘Zedad’ (Old Testament Books of Numbers, 34:8 and the Book of Ezekiel, 47:15)  was completely overran and became the scene of a massacre with homes and churches looted and countless lives destroyed.

Church burning in the rebel controlled province of Raqqa continues with the two most recent cases being the Melkite and Armenian Catholic Churches. Reports of beatings and forced conversions are also said to have occurred in Raqqa as well as at locations like Maaloula.

Just last week, 9 children lost their lives as a result of the school and bus bombings by rebels on the St John of Damascus School in Bab Touma and a school bus in Bab Sharqi, both predominantly Christian districts.

On the previous day, a father and his 4 children lost their lives when their car was hit by a rebel shell in Kashkool in Damascus. Only the mother survived but she was serious injured. The family were returned to their village of Blaat in Wadi al Nasara (the valley of the Christians) for burial.

On Sunday, Jihadist rebels commenced the bombing of the Monastery of the Cherubim on Mount Cherubim adjacent to Saydanaya. They claimed that the Syrian army had a presence at the location.