"What the US did in Iraq we don't want repeated in Syria": Chaldean Catholic Bishop. 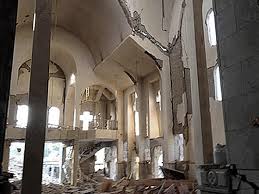 Although President Barack Obama and British Prime Minister David Cameron are consulting their own legislatures before using force in Syria, there’s a constituency with far more at stake they might also poll that would likely deliver a resounding no: Syria’s Christians.

Those Christians may be no fans of the regime of President Bashar Assad, but they generally prefer it to what they see as the likely alternative – rising Islamic fundamentalism and Iraq-style chaos, in which religious minorities such as themselves would be among the primary victims.

“We heard a lot about democracy and freedom from the US in Iraq, and we see now the results – how the country came to be destroyed,” said Chaldean Catholic Bishop Antoine Audo of Aleppo in a recent interview. “The first to lose were the Christians of Iraq.”

“We must say that, what the US did in Iraq, we don’t want repeated in Syria,” Audo said.

That stance has the strong backing of the Vatican, which has launched a full-court diplomatic press. Pope Francis designated Saturday as a day of prayer and fasting for peace, while Vatican diplomats requested that all ambassadors accredited to the Holy See attend a briefing on Syria on Thursday.

The last time those two steps were taken in tandem was in February and March 2003, when Pope John Paul II and the Vatican’s diplomatic corps led the moral charge against the US-led intervention in Iraq.

The devastation of Iraq’s Christian community after the fall of Saddam Hussein lurks in the background of attitudes both in the Vatican and in Syria itself. From an estimated 1.5 million to 2 million Christians prior to the first Gulf War in 1991, experts believe only about 250,000 to 400,000 Christians remain in Iraq today, the balance having been driven into exile or killed.

In late August, the Melkite Greek Catholic patriarch of Antioch in Syria, Gregory III Laham, pointedly asserted that any military intervention by the United States in his country would be a “criminal act.”

Such an assault, Laham said, “will only reap more victims, in addition to the tens of thousands of these two years of war. This will destroy the Arab world’s trust in the West.” He warned it would be no less serious than the use of chemical weapons.

Over the years, Laham has been seen as strongly pro-Arab and pro-Assad, but he’s not an isolated voice. On Aug. 26, Audo told Vatican Radio that a Western attack could trigger wider conflict.

“If there is an armed intervention, that would mean, I believe, a world war,” Audo said.

In a separate interview in late April, he said Syria’s Christian minority, which represents roughly 10 percent of the population of 22.5 million, “all are with President Assad.”

That position has been so consistent from the Christian leadership in Syria that Jesuit Fr Paolo Dall’Oglio, the Italian missionary and anti-Assad activist who disappeared in Syria in late July, accused them of being “co-opted.”

“Unfortunately, the Syrian regime has been very clever in using a certain number of clergymen, men and women, for its propaganda in the West, in which it represents itself as the only and ultimate bastion defending Christians persecuted by Islamic terrorism,” Dall’Oglio wrote in an open letter to Francis in April.

Yet it isn’t just the hierarchy that’s sceptical about regime change.

Bashar Khoury, for instance, is a 29-year-old Latin rite Catholic from Damascus who recently served as a volunteer at World Youth Day in Brazil, helping to run the Arab-language social media operation.

Asked by NCR what he would do if Assad falls, Khoury was clear: “I’ll leave Syria,” he said. “If that happens, the radicals will take over and there won’t be any future for me.”

Since the outbreak of civil war in 2011, reports suggest Christians have been the targets of mounting violence.

Observers believe tens of thousands of Christians have fled the conflict zones, some going into internal exile and others seeking refuge in neighbouring countries such as Lebanon, Jordan, Turkey and Armenia.

The Syriac League, a non-partisan body in Lebanon, estimated in May that there are 10,000 Christian refugees from Syria in that nation alone.The displaced join roughly 150,000 people who’ve been living under virtual siege for months in 40 villages referred to as the “Valley of Christians” in western Syria.

In addition to physical attacks, reports indicate churches and meeting places have been torched, Christian-owned businesses have been looted, and in some cases, Christian women have been targeted for assault. The Christian Post reported in December 2011 that fundamentalist taxi drivers in rebel-controlled areas of Syria had vowed to attack any unveiled female client, who tend to be Christians.

Christian clergy have also become tempting targets for kidnapping, including two Orthodox prelates grabbed by still-obscure forces in April. The prelates’ fate remains unknown. In late February, the website Ora Pro Siria, operated by Italian missionaries in Syria, claimed the going price for a kidnapped priest was in the neighbourhood of $200,000.

In that context, it may be little surprise that many Christians seem to prefer the devil they know.

Aid to the Church in Need, a Catholic humanitarian group, recently issued a report on Syria, quoting one Christian woman who asked to remain anonymous.

“The government was bad, but at least we were safe,” she said. “Not anymore. … Look at what has happened to our churches in places like Aleppo and Homs. The extremists threaten us when we want to celebrate major feasts like Christmas and Easter. They don’t want us in the area at all.”

Patriarch Ignatius Joseph III Younan of the Syrian Catholic church in Damascus* said in May that Christians are so frustrated with Western policy, which he believes is fomenting Islamic radicalism and anti-Christian hatred, that they may give up on the West altogether.

“I believe there will be a time coming when Christians of the Middle East will no longer look to the West for support and perhaps to better strengthen their roots with the Eastern culture and civilization … [to] Russia, to India, to China,” he said.

By John Allen of the National Catholic Reporter http://ncronline.org/